The Marché aux Puces and the Jardin des Plantes 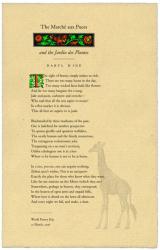 Daryl Hine was a Canadian poet who came to prominence at Poetry (Chicago) where he served as editor for a decade (1968–78). We didn't know Daryl Hine, but we did know Hine's good friend Virgil Burnett, an artist, originally from the American Midwest who served with the US Army in Paris in World War II and subsequently settled in Stratford, Ontario. It was Virgil Burnett who persuaded us to do an illustrated edition of Hine's Arrondissements, which we did, in 1986; and then it was James Pollock who persuaded us to do The Essential Daryl Hine, which appeared in 2015.

‘The Marché aux Puces and the Jardin des Plantes’ first appeared in Minutes (Atheneum, 1968) and was reprinted in The Essential Daryl Hine (Porcupine's Quill, 2015).

The broadside, as it appears here, was issued to co-incide with World Poetry Day, 21 March, 2016.