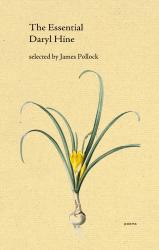 The Essential Daryl Hine presents a judicious selection of the work of a poetic virtuoso, a friend of James Merrill, John Hollander, and Richard Howard long celebrated for his learned wit, formal and rhetorical mastery, and cosmopolitan sensibility.

First published at the age of fifteen and admired for six decades as a poetic virtuoso, Daryl Hine is recognized today as one of the strongest Canadian poets of the twentieth century. His poems, widely cultured and often autobiographical, engage with a remarkable variety of forms, genres, and subjects. With their complex syntax and lavish deployment of metres, tropes, and rhyme, the poems in The Essential Daryl Hine reveal what Pollock, in his illuminating foreword, calls "a matador of art, fighting the toro of death with consummate style."

The Essential Poets Series presents the works of Canada’s most celebrated poets in editions that are beautiful, accessible, and affordable. The Essential Daryl Hine is the 12th volume in the series.

My watery prison shatters in a prism
As I flounder up the fatal falls’
Arpeggios of air, a cataclysm
Of cataracts and broken intervals.

Still in the murk of motionless canals
I dreamt away my staid maturity
Till stirred by that immortal voice which calls
From the heights of the mountains to the depths of the sea.

I lean on air as prisoners on time
Not to let them down. My impetus,
In the interest of my kind sublime,
Appears in person merely perilous:

To climb the stair of stone where I was spawned,
Where ponds are oceans and the rapids give
Gasps of an unreachable beyond
I try, I fail, I wriggle loose, I live

Drop by drop against the stream I am,
And in death’s shallow waterfall belong
Forever to the torrent and the dam
As defunctive music and recurrent song.

Spilt in sperm the mating pair ignore,
Caught in each other’s scales as in a net,
I hung about above the ocean floor,
Part of the liquid pattern of the carpet,

Suspended like a living bathysphere,
Or upwardly mobile in a somersault,
Leaping to measures I can hardly hear,
I flop and I return to the assault,

A prelapsarian memory in man
And bird and beast, a universal wish
For the unforgiving world where life began
And your cold-blooded avatar, the fish. Born in 1936, and raised in New Westminster, British Columbia, Daryl Hine studied classics and philosophy at McGill University in Montreal, and earned a Ph.D. in comparative literature at the University of Chicago. He was the editor of Poetry magazine from 1968 to 1978, and taught at the University of Chicago, Northwestern University and the University of Illinois at Chicago. As a poet, Hine was known for his learned wit, formal mastery, and cosmopolitan sensibility. He published eighteen volumes of poetry, several works of prose and verse drama, and five books of translations from ancient Greek and Latin poets. He was awarded a Guggenheim Fellowship in 1980, and a MacArthur Foundation Fellowship in 1986, among other awards. In 2010 he was a finalist for the Governor General’s Literary Award in Poetry. Hine died in 2012 in Evanston, Illinois, at the age of 76. James Pollock is the author of Sailing to Babylon (Able Muse Press, 2012), which was a finalist for the Griffin Poetry Prize and the Governor General’s Literary Award in Poetry, runner-up for the Posner Poetry Book Award, and winner of an Outstanding Achievement Award in Poetry from the Wisconsin Library Association; and You Are Here: Essays on the Art of Poetry in Canada (The Porcupine’s Quill, 2012), a finalist for the ForeWord Reviews Book of the Year Award for a collection of essays. He grew up in Woodstock, Ontario, studied English literature and creative writing at York University in Toronto, and earned a Ph.D. in literature and creative writing from the University of Houston. He is a professor at Loras College in Dubuque, Iowa, where he teaches poetry writing, Canadian culture, and modern and contemporary American poetry. He lives with his wife and son in Madison, Wisconsin.