Old Age Is a Tree with Decaying Bark 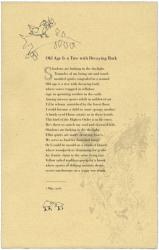 Joe Rosenblatt is perhaps best known as the author of The LSD Leacock which was the second title to appear from Stan Bevington’s fledgling Coach House Press in 1966.

Joe Rosenblatt's ‘Old Age Is a Tree with Decaying Bark’ first appeared in The Bird in the Stillness (Porcupine's Quill, 2016). The broadside was created later that same spring.

The text face is Bauer Bodoni; the initial letter ‘S’ is set in Gill Floriated, a somewhat fanciful design based on a single character that Eric Gill had drawn as a decorated initial for use in a specimen setting of his Perpetua type. Gill was at first reluctant to produce a full alphabet but Monotype advisor Stanley Morison was finally able to persuade him to draw a few more characters from which a full set was extrapolated in 1937 for display casting.

The face was revived by Monotype in 1995 for electronic publishing.

The pen-and-ink drawings are by the poet.