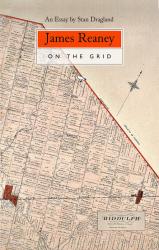 A deep dive into the influences, patterns and structures that underscore the foundation of the literary works of James Reaney, whose poems and plays marry myth and metaphor with a regional, rural sensibility.

‘Set up a trellis for flowering plants to climb all over: it’s there but unseen, supporting all that floral leaf-green beauty.’

In James Reaney on the Grid, Stan Dragland examines an artist fiercely loyal to his artistic practice, deploying the metaphor of the grid to explore the inherited literary patterns and archetypes underpinning works of London poet, playwright and educator James Reaney. With extensive references to Reaney’s considerable oeuvre (from early publications such as A Suit of Nettles and The Box Social to what is arguably his master work, The Donnellys), and to an eclectic collection of theorists, artists and contemporaries whose ideas inform and respond to Reaney’s, Dragland seeks to reveal not only what Reaney’s work is about but also what it does. In so doing, he takes readers by the hand in a surprisingly personal ramble through the processes and productions of one of Southern Ontario’s most influential writers.

This started out as the tenth annual James Reaney Memorial Lecture. It was delivered in London, Ontario, on November 2, 2019. That version turns out to have only scratched the surface of what I’ve been finding to say about Reaney’s literary career. As the talk grew into what it is now, it became ever clearer to me that Reaney’s legacy includes one unmistakable masterpiece, the Donnelly trilogy, a play in three parts so magnificent that it stands, or ought to stand, with the work of literary greats anywhere. But there are many other works of real importance, plus a few that may perhaps be worth reading only to someone like me, interested in all of Reaney, because of what all of it has to say about the best of his work.

Before I met Reaney, I had read his A Suit of Nettles with pleasure and puzzlement. I had also heard that he was preoccupied with ‘the iconography of the imagination’. A graduate student at the time, I was both intrigued and bewildered by that phrase. It was outside my frame of reference. I see now that I was right to be bewildered. I think I’ve come to know something about what Reaney meant by the iconography of the imagination, but it’s not simple. It’s not meant to be. So many of the pages that follow will be, directly or indirectly, devoted to trying to clarify the meaning of that phrase, and other complex matters, to the reader of modest competence I model on myself.

Newly graduated, I accepted the offer of a job at The University of Western Ontario, the name since shortened to Western University, where my education began in earnest. I learned from having to teach, and I learned from some of my colleagues, James Reaney chief among them, especially during the two years we were members of the same teaching team--see Chapter 1. For quite some time I was entirely under his spell. I spent my first sabbatical writing an article about his work. Later I edited and wrote the afterword for a collection of essays on his work. Toward the end of his life, I was the editor of his final book of poetry. By that time, though, our warm relationship had cooled. I have said elsewhere that he was to me a kind of father, a literary father. Any father-son relationship has the potential to be fraught. I was with Reaney for quite a few years, and I never lost my admiration for him and for his work, but I did come to realize that we were very different people and very different sorts of writer. Had we been intimate, rather than just friendly, I might have found out what he was thinking when he called me a ‘postmodernist’ just before I was to be interviewed for a documentary on his work in which I called The Donnellys ‘Canadian Shakespeare’. I knew postmodernist was a bad word in the Reaney lexicon, but it’s not something I have ever called myself. He seems to have thought I had gone over to the postmodernist critics who were stressing theory over literature, because I was nibbling at theory, trying to fathom changes in the literary zeitgeist that were happening at the time. I made the mistake, supposing I had wanted to be sure of staying on his good side, of citing some of that current theory in the afterword to Approaches to the Work of James Reaney. Or maybe he could just see that I wasn’t turning into the sort of writer and critic that he valued. So there came to be some distance, some heat, between us: growing pains on my side, perhaps some disillusionment on his. We never worked that out.

Because of that unresolved conflict, I had some qualms about accepting the Reaney lecture gig, but my admiration for the work was too strong. One benefit of revisiting Reaney was to burn off pretty well all the negativity I had been harbouring. As I’ve read and reread the poems and plays and essays, written and rewritten what I found to say about them, the process has been to explicate, yes, but also to work out what I think and feel about many things, literary and otherwise. The result is personal, but, I think, not at all private. It reaches in directions and incorporates material that would never have come to light for me, and never would have come together, had I declined the Reaney lecture. I can hardly pay any higher tribute to my subject than to say how stimulating it has been to try to make my words worthy of his. I’m not going to get any smarter than I am now. This is it. It has taken everything I have to try to measure up to the phenomenon of Reaney. What more could a person want in a subject?

[Continued in James Reaney on the Grid...] Stan Dragland is a Canadian writer, educator and critic as well as a founder of the poetry press Brick Books and founding editor of Brick magazine. He has published a number of books of fiction, criticism and poetry, including Floating Voice: Duncan Campbell Scott and the Literature of Treaty 9 (Anansi, 1994), which won the Gabrielle Roy Prize for Canadian literary criticism, and Apocrypha: Further Journeys (NeWest Press, 2003), which won the Newfoundland and Labrador Rogers Cable Award for non-fiction. He lives in St. John’s, Newfoundland.