Not the Sweet Cicely of Gerardes Herball 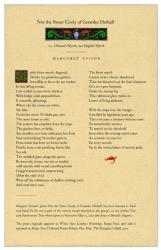 Margaret Avison’s poem ‘Not the Sweet Cicely of Gerardes Herball’ was licensed to Irish rock band U2 for use as part of the concert visuals attached to the group’s Joshua Tree 30th Anniversary Tour, which opened in Vancouver May 12, 2017. The tour was originally scheduled to close in Brussels in August but an added Latin American leg continued on into October. The Joshua Tree Tour in its entirety grossed $317 million, and sold more than 2.71 million tickets from its 51 shows. We do not know why Bono was interested in this poem, specifically, though it may be that Margaret Avison was known as a deeply Christian poet. John Gerarde’s Herball, or Generall Historie of Plantes, was first published in 1597. The book became the most prevalent botany reference in English in the 17th century. The ‘Sweet Cicely’ poem originally appeared in Winter Sun, London: Routledge, Kegan Paul, 1960 and is reprinted in Always Now, Collected Poems Volume One, Erin: The Porcupine’s Quill, 2003.