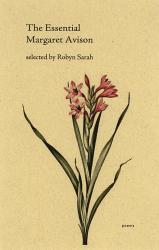 The Essential Margaret Avison showcases the development of one of Canada’s most brilliant and original poets, twice winner of the Governor-General’s Award for Poetry. Margaret Avison’s vibrant life work is distilled here into a selection that is illuminating, generous and richly varied.

The sixth volume of the Porcupine Quill’s acclaimed series of ‘Essential Poets,’ this collection provides an excellent introduction to this prominent Canadian poet and the evolution of her work. Robyn Sarah’s selections amply celebrate Avison’s diverse styles and forms, and reveal Avison’s unique perspective on and response to her world.

Here, one can experience Avison’s dazzling diction (‘‘a saucepantilt of water,’’ ‘‘birds clotted in big trees’’), her metaphoric and tonal complexities, and her quiet examination of the world in which she lived. The Essential Margaret Avison also traces her movement from skeptical intellectual to committed Christian. Though some scholars have dismissed her later religious poetry as simplistic and inferior to her earlier work, the truth is more complex, and the line between what is religious and what is not in Avison’s poetry is difficult to draw. Robyn Sarah describes how Avison’s work became ‘‘more and more a poetry of inquiry, an inner pondering of her daily givens,’’ in which her experience of the worldly and the transcendent are inextricably tied.

Margaret Avison, honoured by the Griffin Prize and twice by the Governor-General’s Award, was named an Officer of the Order of Canada in 1985, and died, at the age of 89, in 2007. This singular poet’s legacy is well represented in Robyn Sarah’s thoughtfully chosen selection.

Praise for The Essential Margaret Avison

Recollect 1960: a time when many artists were courting Eastern thought and deconstructing western literary formalism. Enter Margaret Avison, a poet’s poet, a metaphysical poet, perhaps an academic poet lauded for her sometimes difficult but indelibly rich and intricately woven language. That year her first book, Winter Sun, was awarded the Governor’s General Award. Then, in 1963, she became a devout Christian following a conversion experience. Margaret Avison published seven additional collections, the last following her death, in 2007, at eighty-nine. While not an exceptionally prolific writer, and one who certainly swam against the tides of prevailing artistic metaphysical thought (or lack thereof), Avison is considered to be an important Canadian poet, one of the first to bring modernity to Canadian poetry, and singular among poets for her particular diction, imagism, and rich use of word compounds and synaesthesia. Consider, ‘Smell a saucepantilt of water / On the coal-ash in your grate.’ (from ‘Thaw’, Winter Sun, 1960) The Essential Margaret Avison selected by Canadian poet Robyn Sarah attempts to cull a lifetime of work into a mere fifty pages of poetry text and is rewarding in its success.

Though Sarah has arranged Avison’s collection in chronological order of publication, an argument might be made that readers new to Avison may find it helpful to read the book in reverse order, back to front, then back again. Avison was aware that many found her early work ‘difficult’, and worked towards greater simplicity and clarity later in life. This is not to say that the late work is overly simplistic or lacking in the imagistic and linguistic riches of the earlier, but it is more immediately accessible. Moreover, themes in the early work are echoed later, such that entrance to the early work is widened after familiarity with the late.

Avison’s virtuosity harkens back to seemingly disparate poets in her own distinct timbre; in formal consciousness, and resonance with a deep metaphysical stillness, T.S. Eliot may come to mind. Again, from the poem ‘Thaw’, the opening quatrain: ‘Sticky inside their winter suits / the Sunday children stare at pools / In pavement and black ice where roots / Of sky in moodier sky dissolve.’ Richly imagistic and occasionally colloquial, particularly in the later poems, echoes of Eliot’s foe William Carlos Williams may also be heard, as in the poems ‘Cement Worker on a Hot Day’ and ‘Scar-face’. One thing is certain, no matter the reader’s religious persuasion, there are riches to be had for whoever devotes time to The Essential Margaret Avison.

‘Avison delighted in the word, its tender incarnation, its capacity for playfulness and epiphany. Her language could shock the reader in the manner of the Metaphysicals; it could envelop the reader in the lush rhythms of a Dylan Thomas; it could bathe the reader in the agapeic beauty of the psalms. ... The ‘‘essential Margaret Avison’’ -- to the degree that one can speak of the essential anyone without bold blasphemy -- can be exquisitely tasted in this exquisitely fashioned book.’

There is but one complaint about this excellent collection - its brevity. Avison published more than 450 poems in her lifetime, and Sarah says that she was limited to 49 pages [...] Robyn Sarah has chosen well. The poems included in this far too brief encounter with Avison enable the reader to get a good overview of what made her poetry unique and memorable. For the reader new to her, this is an excellent introductory collection. For avid Avison junkies (of whom there are many), this is a back-pocket book, one to carry around with you to obtain your momentary fix.

In a secular culture, there can be no more insurgent a figure than that of a professing Christian. Avison abided with her faith to the end, and kept it central to her poems, even as they grew more and more spare, her thought paradoxically deepened by increasing simplicity. In the end, she was indisputably the paraclete of a sophisticated poetry, and always eloquent in the articulation of her longing.

‘Not for careless readers, the poetry of Margaret Avison is challenging. Meanings tend to gradually emerge after multiple readings, due to her unusual sentence structure and leaps of association. [...] this [is] an excellent addition for those who have some of Margaret’s recent books. Avison is not merely respected by Christians. In fact, she’s better known in the academic community, having won numerous honours including the Governor General’s Award (twice!) and the Order of Canada.’ One of Canada’s most respected poets, Margaret Avison was born in Galt, Ontario, lived in Western Canada in her childhood, and then in Toronto. In a productive career that stretched back to the 1940s, she produced seven books of poems, including her first collection, Winter Sun (1960), which she assembled in Chicago while she was there on a Guggenheim Fellowship, and which won the Governor General’s Award. No Time (Lancelot Press), a work that focussed on her interest in spiritual discovery and moral and religious values, also won the Governor General’s Award for 1990. Avison’s published poetry up to 2002 was gathered into Always Now: the Collected Poems (Porcupine’s Quill, 2003), including Concrete and Wild Carrot which won the 2003 Griffin Prize. Her most recent book, Listening, Last Poems, was published in 2009 by McClelland & Stewart.

Margaret Avison was the recipient of many awards including the Order of Canada and three honorary doctorates.