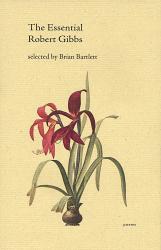 The precision, originality, and playfulness of Robert Gibbs’ poems have captivated readers for over half a century. Mixing the cerebral and the heartfelt, Gibbs’ poems investigate and celebrate family, history, and nature with decisive imagery, idiomatic immediacy, punning wordplay, and breadth of imagination.

An ideal introduction to Gibbs’ poetic world, The Essential Robert Gibbs collects some of the finest, most thought-provoking works from throughout his career. Sometimes compared to Gerard Manley Hopkins and Margaret Avison, he has been called a ‘gourmet of the minimal’ who ‘devotes himself to asserting the value of the ordinary’ (M. Travis Lane) and his work demonstrates both a sophisticated grasp of the human mind and a warm familiarity of voice.

Gibbs’ poems mix sensuous dreamscapes and grounded realities. In his poems landscapes are evoked in all their ripeness, a father’s quiet nobility is celebrated, writer’s block becomes a force of nature, and a mind can become a home.

The Death of My Father

My father died Christmas Eve in
the middle of the night and
the green breath of the big tree
in our frontroom mixed with
the dark smell of death upstairs.
My mother called us in and said
‘I think he’s gone, your father’s gone’, and
seeing the slack black gape
of his mouth, I thought of the cold
bluebodied turkey in the fridge downstairs.

A praiseworthy man, on Sundays out to meeting
with praise of God in his eyes and not
a pigeon missed with breadcrumbs nor
a dickybird in the gutter and not
a tomcat passed with his ruff
unruffled or his rough purr unpurred.
A man simple enough, in love with sunsets
and butter-and-eggs by the railway tracks
where we took our Sunday walks around
the waterfronts and afterwards reformed
baptist hymns which his thick fingers pressed
from the thick strings of his cello.

I see you dad, on your high stool in
your shop, eyeglass wrenched into play and
fine curly gold turning up and off from
your keen engraver as you cut ’Love for
always and always’ on the inside circus
of a secondhand wedding ring.
And how we hoarded the dust from
every sweeping in a tall black can and
shipped it away to the refiner to have
your gold and silver letters, all
your days’ cuttings from coffin plates
and baby spoons, cradled out
in his white secret fire and
sent back, sent back. Robert Gibbs was born in Saint John, New Brunswick in 1930. He joined the Bliss Carman Society at the University of New Brunswick in the late 1940s where he was mentored by Don Gammon, Elizabeth Brewster, Fred Cogswell, and Alfred Bailey, the founder of The Fiddlehead magazine. Gibbs’s poetry started to appear in this publication in 1949.

In his more than twenty-five years of teaching at UNB, Gibbs taught general undergraduate and Canadian literature courses and was the director of UNB’s creative writing graduate program. He served as both editor and poetry editor of The Fiddlehead. Upon his retirement from UNB in 1989, he was named Professor Emeritus.

Gibbs was the keynote speaker at the first Alden Nowlan Literary Festival, and the Festival two years later paid tribute to Gibbs. His body of work was further recognized in 1998 with New Brunswick’s Alden Nowlan Award for Excellence in English-Language Literary Arts. He has been involved with the Maritime Writers’ Workshop since its inception and continues to live and write in Fredericton.