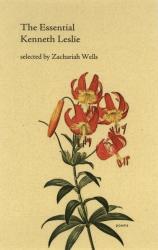 Though barely remembered today, Kenneth Leslie was one of the most remarkable Canadians of the 20th century. An award-winning poet and an influential political activist in the U.S. during the 1930s and 40s, he lived with a rare, furious passion that found expression in everything from his writings to his turbulent personal life.

In a career that spanned more than half a century, Kenneth Leslie published six books of poetry, including By Stubborn Stars, which won the Governor-General’s medal in 1938. He also created The Protestant, one of the more controversial political publications of the 1930s and ’40s, which earned him a national reputation in the United States as well as the unwanted attention of the FBI. ‘God’s Red Poet’ also produced a mass circulation anti-fascist comic book, and composed the words and music for ‘Cape Breton Lullaby’, a well-known popular song. Among his less successful ventures were a ‘Broadway’ musical, which collapsed in rehearsals, and a few dozen other songs which did not sell in Tin Pan Alley.

Praise for The Essential Kenneth Leslie

Kenneth Leslie (1892--1974) was a Canadian poet and political activist whose poetry deserves to be rediscovered for its mastery of form, meter, and language. His first four, of a total of six, books were published in the 1930s, when the Modernist movement in American and European poetry (led by Ezra Pound’s dictate to ‘make it new’) was freeing poetry from the perceived constraints of meter and form. Though Leslie was awarded the Governor General’s Award, Canada’s top literary honor, in 1938, for his fourth book of poetry By Stubborn Stars (which featured a 28-sonnet sequence by the same name) the waves of Modernism would soon leave him in its wake.

Editor Zachariah Wells has carefully selected Leslie’s work in The Essential Kenneth Leslie, presenting poems that showcase the variety of forms he uses, as well as his range of subjects. The poems in this collection function as a window into Leslie’s world: his beliefs (that formal education makes dullards of its students in ‘Cobweb College’ and ‘Tea with the Professor’); his tumultuous personal life (his separation from his wife and estrangement from his children in ‘By Stubborn Stars’); and his artistic convictions (that true beauty lives in the commonplace in ‘Beauty Is Something You Can Weigh in Scales’). Additionally, Wells subtly arranges the poems in small groups by mood and topic. Readers are able to give the poems more individual attention and share in Leslie’s feelings without the risk of being overwhelmed by them.

The true beauty of Leslie’s poetry lies in his often stunning use of language. His seemingly simple word choices, combined with his attention to meter and form, may remind readers of the early work of W. B. Yeats. Additionally, he draws readers in with sound (‘waiting for the snow, / the foam of bloom forgotten’), at times reminiscent of Gerard Manley Hopkins. But the daring of Leslie’s work stems from his desire to reveal the complex dualities with which he wrestled in his personal life. From the double entendre in ‘the crotched necessity of standing true / to her while pledging life and love to you’ to the moody repetition of ‘this monster ledge / of granite under granite clouds,’ Leslie’s language lingers in the mind and on the tongue.

The Essential Kenneth Leslie is a finely-crafted book that readers of poetry will enjoy having in their hands. In the simple, inviting cover design the lasting Smyth-sewn binding, and the clean, antique-feeling font, the publisher’s attention to detail reveals a love of books and the authors it showcases.

‘The Essential Kenneth Leslie, edited by Zachariah Wells, returns to us a unique and wily versifier who was a major element of Canadian poetry in the 1930s, but who is all but forgotten today. He faded from view slowly. Milton Acorn said of him, ‘‘When we come to the loveliest of our orthodox sonneteers, Kenneth Leslie, the battle for the Canadian voice is being fought, and he is winning it.’’ It is good to have these poems back in print.’

‘In his forword to The Essential Kenneth Leslie, Zachariah Wells writes, ‘‘One explanation for Leslie’s all-but-disappearance is his old fashionedness.’’ But while he was out of step with modernism in his time, Leslie’s work rings truer now than Ezra Pound’s claim ‘to make it new.’ It’s been 75 years, and modernism has only bred a coldness. The Governor-General’s Awards were right to honour Leslie in 1938. Instead of writing new, Leslie, who was Pictou County, N.S., born and Harvard educated, wrote real. His father’s death at sea, divorce and the politics of the time are all captured perfectly with fervour and a clear voice. He offers a window onto the ’30 and ’40s when other poets were too busy trying to look ahead.’

‘The Essential Kenneth Leslie is a treasure trove of poetry, highly recommended.’

‘For Leslie, the Shakespearean sonnet is the form that helps him to be critical of modernity and modernism. Editor Zachariah Wells has made a fine selection of Kenneth Leslie’s work, including a sequence of ... sonnets entitled By Stubborn Stars.’

‘When we come to the loveliest of our orthodox sonneteers, Kenneth Leslie, the battle for the Canadian voice is being fought, and he is winning it.’

‘The quality which lends distinction to the best poems of Kenneth Leslie is wholeness. The details of experience are fused in the heat of imagination and expressed in a language that utilizes the idioms and rhythms of popular speech as well as of formal poetry.’

To My Father Drowned at Sea

They said that days would doctor my great ill,
would grow as good as new what grief had set;
and so I waited while they worked their will;
but twenty slow years had availed not yet
to end the long drouth nor to quench the pain
that scorched away the green blades of my sowing,
sending but fickle gusts of teasing rain
to sprout for withering what might be growing.
This day the dry road has a phosphor gleam,
the grassland flows to water for your child,
your salty laughter breaks my sullen dream
and all the world runs wet and deep and wild.
You stood your trick on deck through my long sleeping,
hands on the wheel, eyes to the weather keeping! Zachariah Wells was born on September 10, 1976 in Charlottetown and raised in Hazel Grove, Prince Edward Island. At the age of fifteen he left home to attend high school in Ottawa and has since lived in many parts of Canada (Halifax, Iqaluit, Montreal, Resolute Bay and Vancouver), working as a freelance writer/editor and in various occupations in the transportation sector. Wells received an International Baccalaureate Diploma from Ashbury College and a BA in English from Dalhousie University/University of King’s College in 1999. He first started writing poems seriously in 1998. His poems, reviews and essays have been published and anthologized widely. He is the author of three chapbooks (Fool’s Errand, Saturday Morning Chapbooks, 2004; Ludicrous Parole, Mercutio Press, 2005; and After the Blizzard, Littlefishcart Press, 2008); two trade poetry collections (Unsettled, Insomniac Press, 2004; and Track & Trace, Biblioasis, 2009) and the children’s story Anything But Hank! (Biblioasis, 2008). He is also the editor of the anthology Jailbreaks: 99 Canadian Sonnets. With his wife and son, he lives in Halifax, the only city he likes well enough to have moved to three times, where he works seasonally for Via Rail Canada as an onboard attendant and edits reviews for Canadian Notes & Queries magazine.