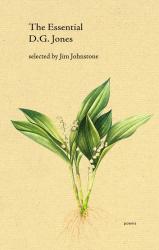 In The Essential D G Jones, volume editor Jim Johnstone presents a selection of the most important writings of Douglas Gordon Jones, one of the few of Canada’s great lyric poets to expertly straddle the line between the modern and postmodern era.

Known for his confident and elemental lyrics, and subtle shifts in diction, tone and voice, the poetry of D. G. Jones offers a portal to the natural world. Though initially his poetry tended toward formality and rigorous control, Jones’s style gradually evolved to become looser, more instinctual, given to linguistic flexibility and visual experimentation. The Essential D. G. Jones celebrates this poetic transformation, presenting the most important lyrics from all stages of Jones’s career, along with a few, never-before published poems to round out the collection.

The Essential Poets Series presents the works of Canada’s most celebrated poets in a package that is beautiful, accessible and affordable. The Essential D. G. Jones is the 14th volume in the series.

I annihilate the purple finch
in the apple tree

it is a winter dawn

it is a faint
raspberry
in the silent cosmos

it may fly off
but it won’t go away

I neglected to mention the snow

oh, we would clothe the mind
in politeness, even
in extremity

to button up is seemly, to
unbutton, step
seemingly without art into
nothing, is grace Douglas Gordon Jones was a Canadian writer, translator and critic. Born in 1929 in Bancroft, ON, he studied English Literature in university at McGill and Queen’s. He continued his career in academia, teaching at Bishop’s University before settling into a post at the Université de Sherbrooke. While there, he co-founded a bilingual literary journal ellipse: Writers in Translation (1969-2012), the only magazine of its kind in Canada. Jones was the author of ten books of poetry, and won the A. J. M. Smith Award for Poetry (1977), the A. M. Klein Prize for Poetry (1989, 1995) and the Governor General’s Award, once in 1977 for his collection of poems, Under the Thunder the Flowers Light Up the Earth, and again in 1993 for his translation of Normand de Bellefeuille’s Categorics: 1, 2 & 3. In 2007, he was appointed an Officer of the Order of Canada. Jones passed away in March 2016 in North Hatley, Quebec.