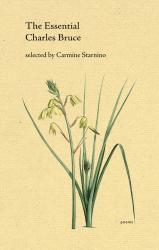 The poetry of Charles Bruce resonates with the sights and sounds of the Maritimes. Unlike the modernist poets of his time, Bruce embraced rural settings, tactile imagery, structural simplicity and direct language.

The Essential Charles Bruce introduces the poet’s work, long out of print, to modern audiences with a selection of his straightforward yet stirring verses that take as their subject the workaday existence along the shores of Nova Scotia’s Channel Shore. Populated by farmers and fisherman and taking place among bucolic cliffsides and beaches, his poems capture modest moments of everyday life and retain the subtly musical cadences of the regional dialect.

The Essential Poets Series presents the works of Canada’s most celebrated poets in a package that is beautiful, accessible and affordable. The Essential Charles Bruce is the eighteenth volume in the increasingly popular series

Rain and blown sand, and southwest wind
Have rubbed these shingles crisp and paper-thin.
Come in:
Something has stripped these studding-posts and pinned
Time to the rafters. Where the woodworm ticked
Shick shick shick shick
Steady and secretive, his track is plain:
The fallen bark is dust; the beams are bare.

Bare as the bare stone of this open shore,
This building grey as stone. The filtered sun
Leaks cold and quiet through it. And the rain,
The wind, the whispering sand, return to finger
Its creaking wall, and creak its thuttering door.

Old, as the shore is. But they use the place.
Wait if you like: someone will come to find
A handline or a gutting-knife, or stow
A coiled net in the loft. Or just to smoke
And loaf; and swap tomorrow in slow talk;
And knock his pipe out on a killick-rock
Someone left lying sixty years ago.

He stands and walks as if his knees were tensed
To a pitching dory. When he looks far off
You think of trawl-kegs rolling in the trough
Of swaying waves. He wears a cap against
The sun on water, but his face is brown
As an old mainsail, from the eyebrows down.

He has grown old as something used and known
Grows old with custom; each small fading scar
Engrained by use and wear in plank and spar,
In weathered wood and iron, and flesh and bone.
But youth lurks in the squinting eyes, and in
The laughter wrinkles in the tanbark skin.

You know his story when you see him climb
The lookout hill. You know that age can be
A hill of looking; and the swaying sea
A lifetime marching with the waves of time.
Listen—the ceaseless cadence, deep and slow.
Tomorrow. Now. And years and years ago. Charles Bruce was born in May of 1906 in Port Shoreham, Nova Scotia. He spent many years as a journalist, including a stint as a war correspondent during World War II. In addition to his prose work, he published six poetry collections characterized by their straightforward use of language and imagery, and by their focus on the sights and sounds of Nova Scotia’s Channel Shore. In 1951, he earned a Governor General’s Award for his collection of poetry, The Mulgrave Road. Charles Bruce died in 1971 in Toronto, Ontario. Carmine Starnino has published five volumes of poetry, including This Way Out (2013), which was nominated for the Governor General’s Award. His most recent collection is Leviathan (2016). Among his awards are the F.G. Bressani Literary Prize, the Canadian Author’s Association Prize for Poetry, and the A.M. Klein Prize for Poetry. Starnino is the editor of The New Canon: An Anthology of Canadian Poetry (2005), and his critical writings have been collected in two books: A Lover’s Quarrel: Essays and Reviews (2004) and Lazy Bastardism: Reviews and Essays on Canadian Poetry (2012). He lives in Toronto, where he is deputy editor for The Walrus magazine.