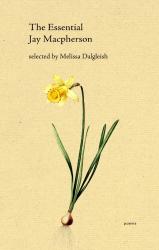 The Essential Jay Macpherson reveals an unexpected complexity in the poetry of one of the leading figures of Canada’s mythopoeic modernist movement.

Jay Macpherson’s allusive lyricism and penchant for mythic resonance have made her work central to the development of Canadian poetry from the mid-century and beyond, influencing the careers of writers like Margaret Atwood among many others. Her wry, somewhat formal verse demonstrates an interest in ideas of duality and opposition as well as an enduring fascination with transforming ancient myths into contemporary commentary. Her unique blend of erudition, irony and musicality led her to win the Governor General’s Award for Poetry and to become the first Canadian to receive Poetry magazine’s Levinson Prize. The Essential Jay Macpherson brings together her most recognized lyrics alongside unpublished or little-known works, charting Macpherson’s poetic development and revealing the splendid variety and complexity of her work.

The Essential Poets Series presents the works of Canada’s most celebrated poets in a package that is beautiful, accessible and affordable. The Essential Jay Macpherson is the 15th volume in the series.

Turning from shadow to shadow, we find
Nowhere the expected revelation,
Never can establish a connection
Between eye and image, surface and hand.

Contained in crying flesh and bone,
Unenvying we lack
Water’s ignorance of pain,
The old indifference of stone,
Fire’s easy taught and slack
—And therefore shall be hurt again.

You might suppose it easy
For a maker not too lazy
To convert the gentle reader to an Ark:
But it takes a willing pupil
To admit both gnat and camel
—Quite and eyeful, all the crew that must embark.

After me when comes the deluge
And you’re looking round for refuge
From God’s anger pouring down in gush and spout,
Then you take the tender creature
—You remember, that’s the reader—
And you pull him through his navel inside out.

That’s to get his beasts outside him,
For they’ve got to come aboard him,
As the best directions have it, two by two.
When you’ve taken all their tickets
And you’ve marched them through his sockets,
Let the tempest bust Creation: heed not you.

For you’re riding high and mighty
In a gale that’s pushing ninety
With a solid bottom under you—that’s his.
Fellow flesh affords a rampart,
And you’ve got along for comfort
All the world there ever shall be, was, and is. Jay Macpherson (1931 – 2012) was an author, publisher and educator central to the development of Canadian mythopoetry in the 1950s and 60s. She became the first Canadian to win Poetry magazine’s Levinson prize in 1957. In 1958 she won the Governor General’s Award for Poetry for The Boatman. In addition to her verse, Macpherson was the founder of Emblem Books and an instructor at The University of Toronto’s Victoria College. Macpherson died in March of 2012. Melissa Dalgleish is a writer, researcher and research administrator whose work focuses on the professional development of graduate students and on mythopoeic modernism in post-war Canadian poetry. Her work has appeared in Canadian Literature and English Studies in Canada, and she regularly blogs for the feminist academic site Hook & Eye. She is also the co-editor of the online project Graduate Training in the 21st Century. She lives in Toronto.