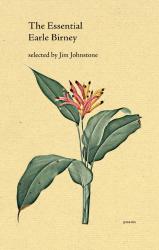 The Essential Earle Birney presents a wide-ranging selection of the celebrated Canadian poet’s most memorable verse.

The Essential Poets Series presents the works of Canada’s most celebrated poets in a package that is beautiful, accessible, and affordable. The Essential Earle Birney is the 10th volume in the series.

In The Creative Writer (1966), a collection of lectures that Birney prepared for the CBC, the poet asserted: "Living art, like anything else, stays alive only by changing."1 His poetry reflects this statement—Birney made significant edits to many of his most canonized pieces throughout his career, despite criticism. Birney’s Selected Poems (1966) can be seen as something of a sea change in this regard: nearly every poem in the book was reformatted to remove punctuation, with the notable exception of ‘David’. The grammatical and typographical changes that began in Selected Poems were refined further in The Collected Poems of Earle Birney (1975), and it’s from this point forward in Birney’s bibliography that the poems in this volume have been chosen.

The transformation of Birney’s work in the 1960s and 1970s was accompanied by a reevaluation of his poetics. He addressed this in the preface to Ghost in the Wheels: Selected Poems (1977), when he wrote: "I should say at the start that I don’t any longer like the words "poet," "poems," etc. They’ve developed pretentious connotations. I prefer "maker" and "makings." They mean the same but the texture’s plainer, oatmeal, not manna."2 Far from being an idiosyncrasy, the removal of rhetorical and syntactic markers in Birney’s work corresponds with his desire for "indefinitely delayed communication."3 While this was considered unnecessary at the time, today the ambiguity created by Birney’s editorial changes charge the general reader with discovery, and reward open-ended interpretations of his poems by creating enjambments that mimic song.

Despite the fact that the poems chosen in The Essential Earle Birney are retroactively stylized in a manner that unifies them, chronology is significant when considering Birney’s output. A meticulous record-keeper, the poet kept track of the date of initial composition and completion of all his work. This record is helpful when tracing Birney’s development in relation to his contemporaries, and the poems in this volume are arranged chronologically to allow for juxtaposition while also establishing the trajectory of Birney’s writing life. Some of his most radical poems, written during a period of linguistic experimentation that saw him align with the avant-garde in the late 1960’s, benefit from comparison with poets of that era.

While Birney never abandoned his experimental instincts, he devoted much of his last 20 years to writing a sequence of extraordinary love poems for his partner, Wailan Low. Represented here by ‘She Is’, ‘On her twenty-sixth’, ‘coming back from the airport’ and ‘my love is young’, his final poems are remarkable for their directness, honesty, and deceptive simplicity. A synthesis of Birney’s playful nature and technical mastery, the poems for Wailan distill the youthful exuberance of their relationship in intensely personal terms. More than anything else he wrote, these lyrics capture Birney unguarded, and they provide a fitting epilogue to one of the most diverse bodies of work of the 20th century.

Praise for The Essential Earle Birney

The tropes that appear in Birney’s poetry are both quietly political and overtly sincere, experimental and traditionally sound. It isn’t an easy feat for a poet to develop and change as he did, and if his work is to survive and be collected, it should be acknowledged as living, for as Birney stated, "Living art, like anything else, stays alive only by changing."