The sea with no one in it 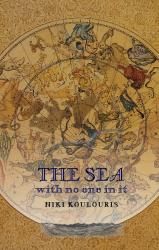 In The sea with no one in it, Niki Koulouris takes readers from the mysterious and powerful depths of the ocean to the familiar and disparate artifacts of our land-locked daily lives.

In this stunning first collection, Canadian-Australian poet Niki Koulouris takes her readers out to sea. Born of Greek descent in Melbourne, Australia, Koulouris’ imagination is fixed on the ocean. Here she conjures striking displays of power from a bygone era, transposing the potent energy of each wave into each line. Deep in Koulouris’ sea, a formidable original force can be found, available to any who recognize it.

Even on land one is not far from this oceanic spell. Here life is composed of disparate pieces that confound us by falling into place. With startling juxtaposition, Koulouris creates a lollapalooza of the obsolete, extinct, familiar and yet-to-be. Sundry artifacts, remnants of a pan-epochal uprising, are adeptly curated, resulting in a realm-altering aftermath. As Koulouris’ modern speakers present us with oracular quandaries and recollections of various items – a Grecian kore, a telephone and sandwich in a Philip Guston painting, or a Twinkie and window envelope conjured up on a cab ride in Chicago, the city of their origins – we find the extraordinary amongst the contemporary disorientation that plagues us all.

Praise for The sea with no one in it

The first section comprises a sustained seascape. Sound patterns and seductive brief phrases play off a metaphysical sense of the ocean, and its power over the imagination, against more concrete images and ideas. Words and phrases nudge against each other and form alliances.... [In] Part 2 ... a number of ekphrastic poems exuberantly inhabit the work of modern artists and ancient monuments. Some readers will readily relate to the evocations of the work of Anselm Kiefer, Philip Guston and Maurice Sendak, and to Berlin’s Pergamon Museum. Others will be intrigued enough to seek out the originals.

‘In her debut poetry collection, Niki Koulouris stands, as many have before her, at the lip of the sea. New from the Porcupine’s Quill press, The sea with [no one] in it is a sparse re-examining of the water that surrounds us, the preternatural body on our shores. The collection rattles with the detritus of land-meets-depths, as spare and exact as a ship in a bottle.’

‘Niki Koulouris’ poems take up the contemporary challenges of environmentalism and ekphrasis—poems about other kinds of artifice, including statuary and Stelarc—in a global frame. Her pithy, often punchy poems mix the sentimental with the acerbic, Alpine cigarettes with "Lolly Gobble Bliss Bomb bliss." Above all, Koulouris’s topic is the sea that "never closes/unlike the sun," with all its mutability and absoluteness.’

‘One can sight in Kouloris’s work the surrealism of the Greek poet Yannis Ritsos, but also the fabulous imagination of Leonard Cohen’s Greek-flavoured poems and songs of the 1960s. Indeed, almost any stanza from Koulouris could be inserted into Cohen’s "Suzanne."’

‘There is something entrancing about Koulouris’s poetry. It makes readers want to dive deep within it, to drown. Its rhythms are intoxicating and, like a riptide, refuse to let go. The surface appearance of simplicity belies the poems’ complex and daunting depth.’

‘[Koulouris] seems to have a whale of imagination and experience with which to talk about our lives in a sort of ocean trip scenario.

‘The logic of a female explorer allows this very talented author to turn the many stories we have into ravishing poems. I hope the other new poets out there won’t be too envious. So much grace. This is the debut book of the season!’

‘It is not surprising that Canadian poet, Niki Koulouris, who was raised in Australia and whose heritage is Greek, focuses her imagination on the sea. What is surprising is the stunning poetry she makes of her setting. These poems – with their unexpected turns, startling juxtapositions, dream sequences and mysteries – are in the service of a sibylline voice that makes Koulouris heir to MacEwen, Atwood and Lowther. By bringing shards of the classical world into the present, Koulouris’ poems provide us with an ironic and, I believe, accurate presentation of our contemporary bewilderment’

once it had been
half man, half sea
unhealed, yet unwounded
by the greyest of steeples

what more can they bring us
these waves
with their formula-one
alligator instincts
but vast zithers
and drop sheets that
fall short of rafts.

what could you give the sea
but your stripes,
since you ask,
your war paint, your blindfolds
your appetite for westerns
in exchange for waves
as wide as trains
from the next frontier. Niki Koulouris was born in Melbourne, Australia, and is a graduate of the University of Melbourne and RMIT University. She has worked as a staff writer and editor at Victoria University. Her poetry and prose has appeared in The Cortland Review, Space, Subtext Magazine and The Age. A beer enthusiast, she has been known to start spontaneous lists on napkins of her top India Pale Ales. Niki lives in Toronto. The sea with no one in it is her first book.