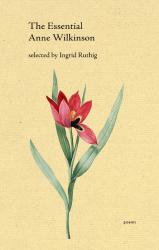 The Essential Anne Wilkinson gives voice to a highly regarded but oft-forgotten poet who introduced a unique female perspective to the Canadian modernist movement.

Anne Wilkinson’s poetic career emerged during a time of few Canadian poets—and even fewer who were women. The Essential Anne Wilkinson showcases the work of her abbreviated but meaningful career, with poems that range from intellectual and symbolic lyrics, to direct, incisive satire. Infused with a woman’s perspective, Wilkinson’s poems reflect her attempts to come to terms with the restrictive world within which she was born and to find her voice amid the expectations of society, gender and class.

The Essential Poets Series presents the works of Canada’s most celebrated poets in a package that is beautiful, accessible, and affordable. The Essential Anne Wilkinson is the 11th volume in the series.

The poet’s daily chore
Is my long duty;
To keep and cherish my good lens
For love and war
And wasps about the lilies
And mutiny within.

My woman’s eye is weak
And veiled with milk;
My working eye is muscled
With a curious tension,
Stretched and open
As the eyes of children;
Trusting in its vision
Even should it see
The holy holy spirit gambol
Counterheadwise,
Lithe and warm as any animal.

My woman’s iris circles
A blind pupil;
The poet’s eye is crystal,
Polished to accept the negative,
The contradictions in a proof
And the accidental
Candour of the shadows;

The shutter, oiled and smooth
Clicks on the grace of heroes
Or on some bestial act
When lit with radiance
The afterwords the actors speak
Give depths to violence,

Or if the bull is great
And the matador
And the sword
Itself the metaphor.

In my dark room the years
Lie in solution,
Develop film by film.
Slow at first and dim
Their shadows bite
On the fine white pulp of paper.

An early snap of fire
Licking the arms of air
I hold against the light, compare
The details with a prehistoric view
Of land and sea
And cradles of mud that rocked
The wet and sloth of infancy.

A stripe of tiger, curled
And sleeping on the ribs of reason
Prints as clear
As Eve and Adam, pearled
With sweat, staring at an apple core;

And death, in black and white
Or politic in green and Easter film,
Lands on steely points, a dancer
Disciplined to the foolscap stage,
The property of poets
Who command his robes, expose
His moving likeness on the page. Anne Wilkinson (21 September 1910 – 10 May 1961) was one of Canada’s few female modernist poets writing during the 1940s and 50s. Born into a wealthy family in Toronto, she grew up there and in London, Ontario, and travelled extensively over the course of her private education. She published her first collection of poetry, Counterpoint to Sleep, in 1951 at the age of 40, followed by her second, The Hangman Ties the Holly, in 1955. Though she considered herself an outsider in Canadian poetry circles, Wilkinson was highly regarded by her peers, and contributed greatly to the Canadian writing community, as a poet, the author of two books of prose, and as a founding editor of The Tamarack Review. Ingrid Ruthig is a writer, editor, artist and former architect whose books include Slipstream(ARKITEXWERKS, 2011), Richard Outram: Essays on His Works (Guernica, 2011), and the chapbookSynesthete II (Littlefishcart Press, 2005). Her writing has appeared across Canada and internationally in publications like The Best Canadian Poetry in English2012 (Tightrope Books), The Malahat Review,Descant, The Fiddlehead, The New Quarterly andCordite, among many others. Her award-winning artwork fusing text and image is held in private collections and has been featured in numerous art galleries and festivals. Ruthig lives near Toronto with her family.