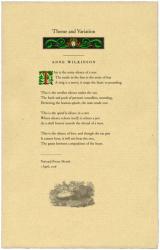 ‘Theme and Variation’ first appeared in Counterpoint to Sleep (First Statement, 1951) and was reprinted in The Essential Anne Wilkinson, edited by Ingrid Ruthig (Porcupine's Quill, 2014).

The broadside was released to coincide with National Poetry Month, April, 2016.