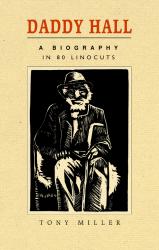 A striking visual saga in linocuts of the life of John ‘Daddy’ Hall, a man of Mohawk and African-American descent who survived war, capture and slavery to become a pillar of the community in nineteenth-century Owen Sound, Ontario. Born of a Mohawk father and an escaped-slave mother, John ‘Daddy’ Hall was a product of not one but two oppressed peoples. His gripping story is the stuff of legends—of the War of 1812, of the harsh realities slavery and of triumph in the face of adversity. Over the course of his 117-year life, Hall identified as a freeman, a scout for the British under Chief Tecumseh, a captured slave, an escapee on the Underground Railroad, a town crier in Owen Sound, Ontario, a husband and, as his nickname aptly suggests, father to an impressive number of children.

Owen Sound-based artist Tony Miller’s 80 stark and arresting black-and-white linocuts present an unflinching portrait of a remarkable African-Canadian whose story of resilience and reinvention offers a fascinating glimpse into the history of Southwestern Ontario.

... Hall was captured by the Yanks in Essex County, 1813, and then sent from Grosse Isle to Buffalo and on into Maryland, from whence he viewed the British-torched White House, blazing, in 1814. Not only that, but a bayonet caught him in the leg, maiming him for life. Anyway, now, he was 12 years a slave, but escaped back to Upper Canada, where he assisted General Fuller against the Canuck, republican-sympathizing rebels of 1837–38.

Taken prisoner again, this time by the 1837 rebels, Hall once again escaped, to rusticate on the Credit River and at Owen Sound, the northern terminus of the Underground Railroad. Here he married for the fifth or sixth time, and began a new career—as Town Crier, while daddying something like 20 of his own children. (We should not be surprised—or shocked—by his fecundity. To have a score of kids, by four or five wives, represented his wish to survive and to pass on a legacy of freedom.)

According to legend, Hall lost his teeth and hair in his 80s, but found them magically regenerated in his 90s. He was able to court another woman, and father yet more children. Here is the victory of the slave over the master....

Kudos to Tony Miller in imagining and drafting Hall’s story as he does. We see the poised, white-hand-held bullwhip and we see the pregnant black belly; we see the War of 1812 as a series of muskets and tomahawks; we see Hall enslaved, we see him escape. He be a prototype, one-man Underground Railroad. Finally, we see him crying ‘Freedom!’ through the streets of Owen Sound. That rapping voice—bringing da Noise and da News—resounds down to our own eardrums. Miller’s panels compose, let’s face it, a spiritual ballad.... Tony Miller is a Canadian painter, sculptor and printmaker. Born and raised in Owen Sound, his experiences facing racism and poverty instilled in him a fascination with his African roots. His art reflects his appreciation of the beauty of many cultures and seeks to explore the effects of past and present on the human race.