Let That Bad Air Out 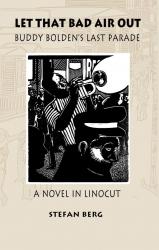 Stefan Berg revives the wordless graphic novel in his portrait of the ‘first man of jazz’. Very little is known of Buddy Bolden. His music was never recorded and there is only one existing photograph, yet he is considered to be the first bandleader to play the improvised music that has since become known as jazz.

Praise for Let That Bad Air Out

‘Berg has done a dandy job of recreating the whole march, from its gleaming beginning to the cornet player’s falling collapse into the dark hole of madness. The powerful final image is of a cornet, the mouthpiece no longer in place. ... For all the book’s dark content, a smart refreshing breeze wafts from its pages, the result of a lovely combo of artistic and bookmaking craft. Well done.’

‘Art books published by The Porcupine’s Quill never disappoint. Let That Bad Air Out: Buddy Bolden’s Last Parade is another glowing example of the superb quality of the releases from this marvellous small-town Ontario press.

‘In a series of brilliantly rendered linocut relief prints, Berg tells the story of Buddy Bolden, a New Orleans jazz musician living from 1877 to 1931. Each crisp image masterfully succeeds in evoking a feeling of the fluidity of the music, the boisterousness of the community, and the darkness of the events surrounding the musician’s demise. An introduction by Donald M. Marquis, author of In Search of Buddy Bolden: First Man of Jazz, and an afterword by renowned artist, George A. Walker, round out this collection.

‘Fans of the graphic novel genre and enthusiasts of linocut relief printmaking will surely be pleased with Let That Bad Air Out: Buddy Bolden’s Last Parade. Highly recommended.’

Wordless novels first appeared after the First World War when the artist Frans Masereel applied his creative genius to making books written in wood engravings, telling a story without the use of the written word. Masereel’s books, beginning with The Passion of a Man (1918), were the dawning of the sequential picture narrative that would reach its height in the 1930’s with the work of American Lynd Ward (God’s Man, Vertigo, Mad Mans Drum, Wild Pilgrimage) and fall into obscurity in the 1950s when the last wood engraved wordless novel appeared, written by the Canadian Laurence Hyde (Southern Cross, 1951). Stories told in pictures have a universality that transcends the boundaries of any spoken or written language providing the reader with a unique experience of a narrative akin to a silent film.

Let That Bad Air Out is the first in a series of wordless novels to be published by the Porcupine’s Quill. The aim of this project is to publish wordless books created using the relief printmaking techniques of linocut, woodcut or wood engravings. Each book will feature original work created by contemporary printmakers. The reason for choosing relief printmaking to illustrate these stories is not only to pay homage to the artists who started the tradition of the wordless novel but to help revive interest and appreciation of the rich qualities of line and texture indicative of relief printmaking. This style of printmaking is not dead and forgotten, but is alive and blossoming in the youthful hands of artists such as Stefan Berg. Stefan Berg’s story of the great Jazz cornet player Buddy Bolden is a fine narrative for a story in linocuts. Berg (a former student of mine) is obsessed with the story of Bolden whose tragic death and legendary playing have awed jazz historians for decades. He takes us through the New Orleans parade where we find Bolden standing out from the band, captivating his audience before falling victim to a mental breakdown. Although no recordings of this legendary Jazz musician can be found, we can again appreciate Bolden’s influence, quietly, with Berg’s story in pictures. Stefan Berg is a painter and printmaker who was born in Toronto in 1985. He finished his final year at the Ontario College of Art and Design in 2008, winning the Eric Freefield Award, and since then has lectured at the college on occasion. In 2009 he founded the Lower Dawes Studio in Toronto. Stefan currently works with intaglio and relief printmaking mediums. He has been featured in the Toronto Star and in Canadian small press publications ‘Cut And Print’ and ‘Block Cutters Social Klub’, published by the Free North Press. The Free North Press also published Stefan’s first independent book, After a While, a selection of block work from 2002 to 2006.

The recipient of multiple scholarships for excellence in painting, photography and printmaking, including a post graduate entry scholarship, Stefan’s intent is to uphold the traditional methods of printmaking as a contemporary artist.