The Mysterious Death of Tom Thomson 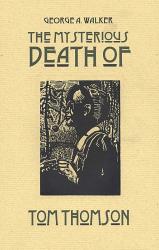 In master engraver George A. Walker’s newest work, The Mysterious Death of Tom Thomson, the circumstances surrounding the death and disappearance of the iconic Canadian artist are explored through some one hundred and nine wood engravings, creating a work that eulogizes not only the artist himself, but the struggle of the artist’s attempt to express himself while constrained by society, the reality of the moment, and mortality. Walker’s engravings in The Mysterious Death of Tom Thomson pay homage to Thomson’s contribution to Canadian culture through both representations of his own life and of the contemporary artistic community as a whole. The German Expressionists, who were active around the time Thomson was painting, often used wood engraving techniques in their own works. A ‘‘wordless novel’’ format captures the essence of Tom Thomson’s artistic spirit and iconic story in an apt way—not only acknowledging the global community of artists of which he was a part, but also alluding to the multiply-interpreted circumstances of his life and death in ways that a text-based work could not.

When his body was discovered in a lake in the Algonquin Park wilderness in July 1917, Tom Thomson had been missing for eight days. He disappeared while canoeing. Although the official cause of death was accidental drowning, how he actually died is a mystery even though it was reported that the corpse had fishing line wrapped around a leg and the head showed evidence of trauma. Speculation abounds either that a neighbour, Martin Blecher, Jr., murdered him, or that he fell during a drunken brawl with J. Shannon Fraser, over an unpaid loan to Fraser for the purchase of canoes.

Thomson is said to have needed the money for a new suit to wear for his marriage to Winnifred Trainor, whose parents had a cottage near where Thomson was staying in the park. Rumours circulated following the death that she was pregnant with Thomson’s child. Neither of these theories was ever proven, and the wide range of speculation serves only to perpetuate the Thomson myth.

The Mysterious Death of Tom Thomson re-imagines in some one hundred wood engravings the events leading up to Thomson’s tragic death and the discovery of his body. It explores the themes of death and the realization that, in spite of even the greatest achievements, a human is nonetheless powerless against it. The narrative is a visual elegy reflecting on the loss of a gifted artist and a man of his time fluent in the visual language of modernism, who also found solace and an artistic muse in the wilds of the Canadian bush. George Walker’s engravings chart his life, relationships and journeys as he made a living as a commercial artist in early twentieth-century Toronto, and a painter who found creative inspiration in the hinterland of lakes and forests.

As Walker conceives it, this book also translates in a purely visual language one of the earliest known works of literature, the Epic of Gilgamesh, about an ancient king and master builder, named Gilgamesh. A story told in two parts, the first revolves around the relationship between Gilgamesh and Enkidu, a wild man created by the gods as Gilgamesh’s equal. Enkidu was an innocent savage, content to live among the beasts until a trapper tamed him.

Through his friendship with Enkidu, Gilgamesh learns much about what it is to be human. He experiences love and compassion, as well as death and loss. As Enkidu rages against his own death, he fights to live. His distress at his impending death is appeased by the sun god who assures him that he will be remembered after he passes on. The second part of the epic, focusing on Gilgamesh’s sorrow over Enkidu’s death, takes the form of a quest for immortality. He grieves heavily over the loss of his friend and vows to find the key to everlasting life. So, he sets out on his own journey through the underworld to learn the secret of everlasting life.

This ancient story about finding redemption in death is ultimately about the meaning of remembrance, and is also a parable of artistic creation. Expressed metaphorically, the epic advocates the reconciliation of the dual nature of the artist hero -- his sensibilities as a man of his time and builder of cities, with his natural self, personified by Enkidu.

On his journey, Gilgamesh must find ways to express creatively his tremendous personal energy, but still act in a manner that accords with the limits and responsibilities imposed upon him by his society and universe. These are the same obligations that face Walker’s hero, Tom Thomson. Walker’s Thomson is a modern-day Gilgamesh. In the wordless, pictographic narrative, Walker describes the struggles and accomplishments of his artist protagonist. Like Gilgamesh, Thomson must also come to terms with the gifts and talents that are his alone, and to live out his vocation in both the city and the wilderness against the background of war. This is a narrative constructed around a man and his search for meaning by experiencing nature. Thomson rejects the modernism of the city, its industry and commerce, in order to find his destiny in the hinterland.

There is an even larger narrative that enfolds the book that you have in your hands. It is a story that includes George Walker, an artist and wood engraver, coming to terms with the death of his own artistic double and Enkidu-figure: Tom Thomson. This book charts our author’s realization that he too must learn about death and tell the tale as art to instruct all of us.

Gilgamesh is told that since immortality is for the gods alone, he should find joy in life and to live a life worth remembering. While everlasting life is not his destiny, Gilgamesh is instructed to leave behind him a name and also the fruits of his creativity -- buildings and stories -- that will endure. ‘‘I will go to the country where the cedar is felled,’’ he tells Enkidu. Thus, he turns his attention away from small personal desires to loftier aims -- desires that benefit rather than harm. This is the same morality tale that Walker tells us in his suite of engravings.

In The Mysterious Death of Tom Thomson, the hero embodies qualities of both Gilgamesh and Enkidu. Walker’s mystery teaches us what it means to be human and mortal. It also tells of the power of art to be a living witness of the true stories that are drawn from a deep well of experience and myth that unite humankind.