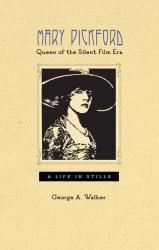 In this wordless biography, wood engraver George A Walker provides a fitting stage to explore the life of Mary Pickford, a silent film star whose groundbreaking contributions to the motion picture industry earned her the title ‘Queen of the Movies’.

At the age of 17, Toronto-born Gladys Louise Smith, known to the world as Mary Pickford, burst onto the silent-film scene. But Pickford was more than just ‘the girl with the curls’. In addition to her acting career—an unequivocal success spanning 52 features—Pickford helped establish the Academy of Motion Picture Arts and Sciences as well as the studio United Artists. The first woman to create her own film corporation, she pioneered the roles of the independent actress, film star, producer and distributor.

In Mary Pickford, Queen of the Silent Film Era, wood engraver George A. Walker tells the story of Pickford’s life in a visual, sequential narrative not unlike the silent films of old. Walker’s black-and-white wood engravings recall the monochromatic media of Pickford’s films, and echo the experience of interpreting stories visually.

Mary Pickford, Queen of the Silent Film Era originated as a limited edition of 35 copies hand printed in Walker’s studio in Leslieville, Toronto.

The houselights come back up while the final credits roll. Light-borne illusions that have been dancing in front of our eyes fade. We are left with memories that seem as ineffable as dreams and as fugitive as the starlight growing ever more faint on the screen and in our mind.

For the length of time we have been immersed in this silent shadow land, time has stood still. We watched, rapt and mesmerized by the ways black and white pictures can cast us instantly into another time, another dimension.

This is the power of monochrome, of a spectrum made up of tones and tints. Their endlessly complex interactions hypnotize, cast spells transporting us to realms of heroines and villains, fear and loss, hardship and triumph, love and longing.

The wonder of Mary Pickford’s palette is that it comprises just the one hue—black—that is tinted by light rays. Through the great technologies of motion picture projection, animating sequences of single, printed images on celluloid just by illuminating them from behind, she discovered a mystical means of telling stories by making light itself her agent of self-expression.

The miracle of her art is that she created vast imaginative universes as if from nothing but shadows penetrating the eye and mind, breaking the barriers between reality and dreams. Her theatrical tableaux are not much more that fluttering figments made from radiant light.

In the darkened cinema, at the very moment when mind and body dissolve in the presence of a Pickford creation she has you in her spell. A grand manipulator of emotions and passions, she gives us characters that incarnate from entirely different realities than the place we sit. Certainly they are in front of our eyes as projections on a screen, but as emanations they come from and commune with some space deep inside us, from a place that is foundational to the human condition.

Mary Pickford’s subject is as singular as herself and as universal as humanity. She taps the human heart by offering up versions of her story bathed in vulnerabilities and doubts, wrapped in cloaks of strength and frailty, and accorded with the virtues of justice and truth.

She crafts a presence that is both an element of her life story, and a fictional world fully transformed by a pure and mystifying artistic alchemy. This is her magic charm. We believe that her life and art are one and the same.

Triumphs and disappointments—hers and ours—are reflected in the tales of invented heroines. Shaded divisions between creation and lived experience are so indistinct that Mary Pickford dissolves into her art and we readily follow her. She disappears into the roles she acted out. Enraptured, we meet her on her stages as co-stars in an uncanny theatre.

In a dimmed, flickering, black and white sanctuary we acquiesce to this cunning artist’s power transforming a living actor into idealized characters we accept as eternally alive.

We surrender our thoughts and actions to her and them. Movie-born personae illuminated by their author’s life grip us. We embark on mute celluloid odysseys that ring true for the time it takes to view the art in front of our eyes, yet also, upon leaving the cinema or closing this book, forever afterward.

‘You can watch a film, in silence or with dialogue and music. To read a book that is mostly pictures—you must be visually literate. Walker makes an experiment out of the way we consume visual media.’