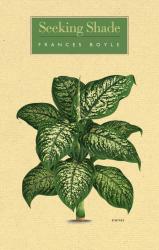 In Seeking Shade, ordinary situations are imbued with extraordinary emotion as women and men explore identity and independence, navigate complicated relationships and confront the fallibility of mind and body.

A reckless young woman dances through the Second World War—and through the lives of many a man in uniform. A graduate student considers a popular film and revisits a past tragedy as she watches flames devour her apartment building. A hardworking man struggles to come to grips with his own helplessness at three stages of enforced quietude. A wife and mother questions her health—and her sanity—when she is plagued by phantom pains and visions of ghostly twins.

Through these and other stories, Frances Boyle leaves readers with a retinal impression, ‘a shadow left by a flash’, reminding us that the ways we communicate—through art, through literature, through dance, through performances theatrical and otherwise—shape our lives and the stories that we tell.

The bulk of Chantal’s apartment building, black against dark sky, fringes itself with orange. Her bare feet, cold in rubber boots. That’s her home there, with flames shooting out of the roof, though just on the one side. And, so far, only on the third floor, the apartment above hers. A play of light, almost pretty, on the arc from the hoses. It smells. A smutty clinging smell, and a smoky residue that’s scratched up her throat, left her eyes red and watery. She didn’t notice someone put a blanket round her, but here it is, heavy over her shoulders, like in a screenshot familiar from an old movie, or many movies.

And Milou. Her dog hasn’t a clue what’s going on, struggles, pushing against her collarbone with two paws. Another paw pushes into her stomach She’d grabbed him but not his leash—well, that’s not too surprising. So, she’s holding him and he’s getting heavy in her arms.

The sound of fire hoses over gravel is like snakes slithering. She can’t think why snakes would come to mind. But the water—her ceiling must be getting soaked, maybe it will collapse. Like a soggy pancake.

The lyric pull of fire, its appetite, draws an after-midnight crowd of gawkers, slack-jawed and silent, to the sidewalk. Milou wants down, poor thing can’t understand why they’re outside amidst circling red lights, the sound of water, its muscular coiling. Her mind is jittering, like the dog in her arms. What’s next? Chantal juggles his furry body, the twenty pounds is a strain to hold. Her shoulders are knitted tight, the scratchy weave of the blanket a weight on them.

One movie in particular had many blanket-draped shoulders. A Canadian director, she can’t think of his name. She’d watched it when she was still in undergrad, in her film-studies class. That beguiling adjuster—will he come for her? His arm heavy around her, his grip tight. Smoke on her hair, her rumpled mismatched clothes somehow a turn-on for him, so he’d throw her on a bed in that motel, cover her mouth with his, fuck her until the shaking stopped.

No adjuster here now, just Ottawa Red Cross folks with coffee and sandwiches. Milou is struggling to throw himself from her arms, so she lowers him to the ground, stoops to loop a finger through his collar. View of her green-plaid pyjama cuffs stuffed into the boots. Ash drifting might have been snowflakes, hovering in yellow streetlamp glow before lighting on concrete.

She recognizes the other tenants by their bedraggled looks, blankets dragging on the ground, like hers. The guy from the upstairs apartment sits with the paramedics. He stumbled out of the building a few minutes ago, making it on his own steam with a firefighter holding one arm. Coughing, dopey and dazed-looking. But alive.

Chantal straightens, grabs at the blanket to stop its slipping, catches it to her throat with one hand. Someone has given her a cord to tie to Milou’s collar, and he dances and jitters now at her shins. She reaches for her phone to take a picture of the fire, but slides it back into her pyjama pocket.

Eyes want to sink closed. So tired. Flames leave a reverse negative image on the inside of her eyelids. Slow burn of beams. Tumble of collapse, sparks flying. Sirens scream and lights turn, like the night Deanna and Greg died. Frances Boyle has practised corporate law, volunteered for a number of feminist, arts and international development organizations, and served as a board member and Associate Poetry Editor for Arc Poetry Magazine. She is the author of a novella (Tower, Fish Gotta Swim Editions, 2018), two books of poetry, (This White Nest, Quattro Books, 2019 and Light-carved Passages, BuschekBooks, 2014), and several chapbooks. Seeking Shade is her first collection of short fiction. She lives in Ottawa with her partner and a large standard poodle who believes he is a lap dog.