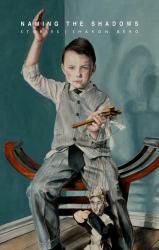 Sharon Berg’s quietly insightful collection focuses on relationships between generations, acknowledging the prevalence of the shadows that are everywhere—but also celebrating the light.

The stories in Naming the Shadows are touched with humour and outrage, mystery and shadow. Curious preteens receive an unexpected education at a mall-side carnival show. A lonely dairy farmer develops a special bond with his neighbours’ children, then suffers unexpected consequences. An ageing author manages to get one up on her adversarial interviewer, while another woman’s unsettling way of remembering past lovers confirms her emotional freedom.

In these stories of loss and learning, conflict and memory run through generations, innocence gives way to experience, and all must learn to redefine themselves and the way they see the world.

The police called about a week later. They’d found her in a vacant building owned by the town hospital, with her skinhead boyfriend and a case of beer.

‘I want to see that man charged with statutory rape,’ I said, picturing this scene.

‘Well, ma’am, she’s fourteen." The officer paused, then added, ‘Which is the age of consent.’

‘Consent? Since when? Fourteen is still a child! She hasn’t got a clue about what it means to give consent!’

I began to cry, feeling the ground shake under me. The age of consent was sixteen when I was a kid, and most of our parents had considered it too young to start seeing boys.

‘How can you call it consent, even when he’s plying her with alcohol? This is insane. It’s against the law to provide alcohol to a minor. She is a minor at fourteen. Surely you can charge him with that?’

The officer was placating. ‘I understand, ma’am,’ he began, and I could see that he was already backing out of that option.

‘Well, if you can’t charge him, can you at least bring her home? I registered her as a missing person.’

‘I would bring her home,’ he said, ‘but her street friends have already clued her in. She told me she’ll just walk away from your door, if I bring her to you. I know you reported her missing, but even with us still sitting in the cruiser to write up the report, we’d need a brand-new order to stop her from leaving again.’

Straight talking. This was his best attempt to be helpful. At the time, I couldn’t get past the thought that I’d already lost her, still unsure whether she was blaming me for too little or too much attention.

‘What can I do?’ I sighed, hearing the note of desperation that crept into my own voice.

‘Well, ma’am, I hate to say it like this, but we know the people she’s running with pretty well. They have a long history.’ He drops his next point like a bomb. It was worse than I feared. ‘This guy she’s with is one of the ring leaders. I think you just have to hope that your daughter gets hurt bad enough that she decides to come home, but not so bad that she can’t come home.’

My heart stopped for a moment, I swear. I had no options as her parent then, except prayer. After I hung up, I fell to my knees, crying and praying to whatever greater power there was guiding the universe to save her.

Praise for Naming the Shadows

‘Sharon Berg follows the rich Canadian tradition in moving from poetry into prose for her collection, Naming the Shadows. "Storytellers also preserve fragments, brief glimpses of the gestalt, puzzled together within their collection." Though the author’s sensibility is Impressionist, her attention to telling detail is specific in these (sometimes) linked stories. Naming the Shadows draws you into an enticing colour field of intriguing characters and evocative set scenes. As a daughter of a painter, I love her painterly perceptions. In the shadows lurk hidden stories that emerge through Berg’s passionate prose with intimate, unflinching honesty. The constant is Berg’s attention to language and perception: a poet’s eye and ear alongside a delight in the sensory world as witness to "the glossy sheen".’ Sharon Berg is the author of poetry and stories as well as nonfiction that focuses on First Nations history and education. She has published several poetry collections, including To a Young Horse (Borealis Press, 1979), The Body Labyrinth (Coach House Press, 1984) and a number of chapbooks. After these early successes, Berg focused on her career as an educator, and on her international literary e-zine and chapbook press, Big Pond Rumours, which she established in 2006. Her retirement in 2016 inspired her to take up her pen once again, and since then she has written poems, short stories and novelettes for a number of publications, including Story Quilt, Quarry, The Fiddlehead and The Malahat Review. Naming the Shadows is her first published collection of short fiction. She lives in Sarnia.