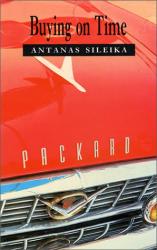 The anecdotes, extended scenes and burgeoning imagination that make up these stories are tightly composed and sharply focused. The book manages to be both harsh and sympathetic. It welds humour, tragedy and the personal embarrassments we all live through in a colourful and memorable way.

Take a step back into the dawn of suburban life.

Revisit the era when mothers in print dresses performed the arcane ritual of mixing the colour dot into the margarine, fathers filled every room of the house in Weston with tobacco smoke, and all the riches of America were to be had by buying on time.

Nothing you ever saw on ‘Ozzie and Harriet’ ever looked anything like this. East European immigrants to Toronto in the early fifties dreamed of the good life in the suburbs. But they did not have any money, so they put up an outhouse, dug a pit in a new subdivision, threw a roof over the hole, and lived there among the lawns and gardens of their neighbours whose imaginations were largely limited to asphalt driveways. Their neighbours were not amused.

Buying on Time is a very funny and occasionally poignant look at growing up in the suburbs in the 1950s and ’60s. This collection of linked stories follows an immigrant family as it fights to build a house and find a new life in Canada after World War II. At the heart of the stories is the Old Man, the irascible, insanely self-confident, pipe-smoking father who studies what he calls ‘the English’ with an incredulity that is wildly comic, and who marches into Eatons trailing sawdust in order to buy his depressed wife a new fur coat. His English is bad, and his religion is almost mediaeval, yet he has cunning and a zest for life, as well as a taste for Five Star Whisky.

Praise for Buying on Time

‘The stories are funny, discerning, sharply observed, and unobtrusively well written. Reading them is as easy as breathing.’

‘The anecdotes, extended scenes and burgeoning imagination that make up these stories are tightly composed and sharply focused. The book manages to be both harsh and sympathetic. It welds humour, tragedy and the personal embarrassments we all live through in a colourful and memorable way.’

If only it were that simple.

This collection of linked stories is about a DP family in the town of Weston in the 1950’s and later, a time when the place was being swallowed up by Toronto. I am the youngest of three boys of a DP family that happened to live in Weston at the same time. Yet this collection is not an autobiography.

I can almost hear my friend snorting in laughter at this denial. ‘He doesn’t want to take the heat,’ he might say. I could point out that some of the stories take place in a time before I was born, but that probably wouldn’t convince him either.

I certainly did poach on what I grew up with, but what I stole was not what a reader might think. I wanted to grasp what a certain time felt like. Early suburban life was never ironic for those of us who grew up through it. We honestly thought that we were living in a new, better world, especially those of us who had WW II behind us, even if only through the stories of our parents. The fifties were never ‘Happy Days’ or ‘Ozzie and Harriet,’ or even ‘Father Knows Best.’ They were a refuge from the horror, death, and dislocation of the war.

As we children of the fifties grew older, we looked back on that generation of parents as smug at worst, and deluded at best. This willful amnesia has painted the era as mostly ridiculous, with a dark smudge for the McCarthy circus. It was never as simple as that.

Nobody celebrated differences then. Why should they have? Differences had caused the war in the first place. We tried to believe that we were all the same at heart, and we clutched at our conformity not out of dullness of spirit, but out of an intuition that our difference, if encouraged, might lead us to cut each other’s throats.

The reality of suburban life in that decade is fast disappearing. The parents of that time, many of whom had gone to war and then went on to have 2.2 children each, are already beginning to die. Those of us who were kids then seem to have forgotten the tastes and smells.

This series of stories first began with a smell, that most evocative of stimuli. Some time around 1990, I had placed a wet pair of home knit mittens on a heater to dry, and I was overcome, at least emotionally, with the smell of wet wool steaming on a radiator. This smell was my madeleine.

The fifties were not all that long ago, yet the smell of wet woolen mittens has disappeared from the nineties. So has the scratch of a rough woolen scarf. The same is true of the smell of pipe tobacco, except for outside official buildings where the rare man with a pipe stands like a mournful dodo among the hacking cigarette smokers.

Even the myth of fifties conformity is misleading. Each suburban home was an island that was the home of a strange tribe. No one knew this better than the late John Cheever.

And these local tribes, made up mostly of ‘Anglos,’ were especially foreign to the DP’s, the so-called Displaced Persons, the immigrants of that decade. The act of mixing the colour dot into the margarine seemed like an arcane ritual, the pouring of fat from the frying pan a dangerous extravagance.

To say that I took nothing from the family I grew up with would be untrue. My brothers were avid and successful amateur football, hockey, and baseball players. I was temperamentally and physically incapable of following them in their passions, but I did take some of their spirit for this collection of stories, the tough, aggressive spirit of the sportsman who would rather be knocked flat than yield an inch. From my mother I took a very European sense of the value of culture and education. And from my father, I took shrewdness coupled with an almost medieval sense of piety, and a self-confidence so absurd that it made me tremble with anger and admiration.

I took various fragments as seeds for the stories here. These were anecdotes I heard over the dinner table, at the homes of others in our ethnic tribe, and in the church basements after those impossibly long Latin high masses of the fifties. Our ethnic tribe was as varied as any other, but it seemed to take special joy, even zest in the adventures in a new land. In a smoky church basement I first heard of the lumberjack who wrestled with bears, of a woman who married a legionnaire, and of the secret delights of Voltaire. If there was a collective vision among the DP’s, it was to learn the rules of the game in North America, and then whip the locals. The ethnics won that game, only to discover that they are the new establishment; it is they who need to be beaten by the newer immigrants still.

As for the town of Weston, it has now been swallowed and digested by Toronto. Some of the buildings, the old library, the Central Restaurant, and Humber Memorial hospital still stand, but the place is gone. I’m still young enough to be shocked by the disappearance of the past; the very old seem to have gotten used to it.

Every writer knows that fiction plays by its own rules. Characters march off in their own directions and landscapes change to suit themselves. I couldn’t write an autobiography if I tried. A story determines its own truth.

So none of this is true in the sense of autobiography, nor is it history, but it does try to be true in the sense of capturing a taste, a smell, and an attitude that are fast retreating, becoming as remote as the attitudes of the roaring twenties, the gay nineties, and all the eras that came before that. I didn’t want to pin down the butterfly of the fifties in suburban North America and put it into a display case. I just wanted to get the creature to flap its wings a few more times. Antanas Sileika is a freelance broadcaster and magazine and newspaper writer as well as a fiction writer. His work has appeared on CBC radio and in publications from Saturday Night to the Globe and Mail. His fourth novel,Underground, a love story set in the underground resistance to the Soviet Union in the forties, will appear in the spring of 2011. Sileika lives in Toronto and is the artistic director at the Humber School for Writers.