Out of the Wood (Enhanced Edition) 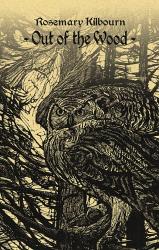 Out of the Wood presents eighty reproductions of wood engravings created by Rosemary Kilbourn over a period of fifty years, accompanied by short, elegaic fragments of text that elucidate the artist’s unique and influential aesthetic.

NOTE : This enhanced edition of Out of the Wood includes a large PDF file (over 250 MB) and may take some time to download. Consider this when deciding which edition to purchase.

The reach of Rosemary Kilbourn’s art -- primarily wood engravings and works of stained glass -- spans the country, having found welcoming homes in galleries and churches from Victoria to Montreal. Her engravings on wood have inspired and influenced a generation of artists that include Gerard Brender a Brandis, Wesley W Bates and George A Walker, but Kilbourn herself lives in quiet seclusion in a nineteenth-century schoolhouse -- known as the Dingle School by locals -- in the midst of a protected forest area on the Niagara Escarpment, and she’s lived there in the woods, a mile from her nearest neighbour, since she bought the property in the late 1950s.

Out of the Wood presents a chronological retrospective of Kilbourn’s wood engravings, starting with samples of early work she completed in London in the 1950s and thence documenting the remarkable growth of her utterly unique style over the next five decades. Each print is accompanied by Kilbourn’s own anecdotal commentary, offering insight into the art of wood engraving as well as reminisces about her life as an artist and as a resident of her beloved Dingle School in the Caledon Hills.

Kilbourn’s engravings often depict local scenes of nature and countryside, and her affection for the rural life shines through in the sweep of her burins. The writing is fresh and humble, welcoming the reader into Kilbourn’s world and offering a rare glimpse into the core mechanics of a wood engraver.

Praise for Out of the Wood

More than eighty prints executed over fifty years (from 1956 through 2006) tell the story of engraver Rosemary Kilbourn’s fascination with, and reverence for, both the practice of looking closely and the natural world that mostly occupies her attention.

"The land has an intelligence of its own that Kilbourn acknowledges through the gaze of a mind finely tuned to expressing its vitality," says Tom Smart in his eloquent introduction to Out of the Wood. But hers is not the disembodied gaze of a distant observer: Kilbourn is of her surroundings. Continues Smart, "Her compositions insist that we belong to the landscape as surely as the trees and structures that blend into its topography."

This theme of an integrated world resonates throughout many aspects of the work presented. And in the same way that Kilbourn’s glorious art cannot be separated from her rural Canadian lifestyle (which frequently forms its subject matter), so, too, does her book transgress genres--art, memoir, environmental study--as surely as it satisfies the criteria for each.

Some of the finest examples of the prints collected here form a group of six engravings detailing industrial scenes to accompany a book by her brother William, The Elements Combined: A History of the Steel Company of Canada. In them, we watch men working at a blast furnace, and we also see the farm equipment eventually made possible by their work. Whether Kilbourn’s subjects are industrial, biblical, such as the wonderful Obedience of Noah, or closer to home, like the many views of the former schoolhouse she so gratefully inhabits, the compositions are packed tight, with something of interest in every space on which the eye can rest and register its regard.

Throughout the book, the artist educates her reader using images and words. Kilbourn’s notes, opposite each print, discuss everything from her motivations to her tools and methods, forming an atypically friendly instruction manual. She writes with a graceful, straightforward style, as evidenced in this example taken from the preface: "Eventually I came to realize that some of the elements I most wanted to express in landscape were, to an extent, presupposed in engraving. The first was light. Brilliance comes from the contrast of the rich black printed from the surface of the block, while every cut into the wood I rendered as white. The process is not unlike drawing with light." Considering that comment and the multiple framing devices inherent in her compositions, it makes sense that Kilbourn has added designing stained glass to her repertoire over the past few years.

Kilbourn’s sumptuous visions remind me of a fellow nature worshiper with an equally textured style: early nineteenth-century British Romantic painter Samuel Palmer. In the work of both artists, there is a kind of quiet ecstasy expressed that makes them a pleasure to behold again and again.

‘Rosemary Kilbourn ... , though perhaps better known for her work in paint and stained glass, has produced what I feel to be the most exciting contemporary work in [wood engraving] in the country.’

‘At the ‘‘Dingle Schoolhouse’’, Canadian artist and wood engraver Rosemary Kilbourn acquired a home and a landscape that called deeply to her, acting as artistic muse and source of inspiration. ... In the many engravings Kilbourn has made of this place over the past 55 years, there is a sense of absolute harmony in the relationships of parts to the whole landscape. It’s as if the worlds depicted in her prints are visual expressions of a deeply integrated creation - natural forms and built structures, and artistic intent finely in tune with artistic creation.’ Rosemary Kilbourn was born in Toronto in 1931. She graduated from the Ontario College of Art in 1953, at which time she received a medal for drawing and painting. Shortly after graduation she emigrated to London, England, where she worked and studied until 1956.

Over the years, Rosemary Kilbourn has been active as a teacher, a wood engraver and a stained-glass artist. As an engraver she has created illustrations for a number of books. Among these are The Firebrand by her brother William Kilbourn, published in 1956 by Clarke, Irwin. She also produced wood engravings for the 1958 edition of Farley Mowat’s The Desperate People (Little, Brown), for William Kilbourn’s History of the Steel Company of Canada entitled The Elements Combined (Clarke, Irwin, 1960) and forThe Shadow of the Year (Aliquando,1976) by Florence Wyle. One of Kilbourn’s most well-known engravings, based on an interpretation of The Fruits of the Earth by Frederick Philip Grove, was featured on a 17-cent Canadian memorial author’s stamp in 1979.

Kilbourn’s engravings first appeared in the Canadian Society of Graphic Art annual exhibitions in 1958, and then again in 1962, 1964 and 1967. They were included in a show called ‘Prints and Drawings’ at the National Gallery of Canada in Ottawa in 1966, and were exhibited there again in 1969 in a show entitled ‘How Prints are Made’. Her engravings on religious themes were displayed at Regis College, Toronto between 1963 and 1966. Rosemary exhibited with the British Society of Relief Block Printers from 1973 to 1975, and participated in the Canadian Biennial of Prints and Drawings (1978). In addition, Kilbourn exhibited her wood engravings from 1959 to 1987 in various group and solo shows at McMaster University, at the Sisler Gallery (Toronto), the Lewis Library in Deep River, the Brampton Library and Art Gallery, the Alice Peck Gallery in Burlington and the Grimsby Art Gallery. She exhibited with the Society of Wood Engravers (England) from the late 1990s, and was awarded membership in the Society in 2001. Her engravings are found in major museums and galleries across the country. These include the Montreal Museum of Fine Art, the Waterloo Art Gallery and the Art Gallery of Greater Victoria, BC. Her engravings are also represented at McMaster University, the University of Guelph and the Universities of Regina and Calgary. Rosemary Kilbourn was elected to the Royal Canadian Academy of Arts in 1977. She continues her long-term residence in The Dingle School, a nineteenth-century schoolhouse ensconced in a protected forest on the Niagara Escarpment north of Toronto.