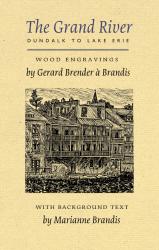 Wood engraver Gerard Brender à Brandis and writer Marianne Brandis reveal the private life of the Grand River in Ontario, documenting through words and images the ecological, social and historical significance of the Canadian Heritage River.

The Grand River, winding for nearly 300 kilometres through southwestern Ontario, is a Heritage River, its watershed rich in prehistoric, historical and contemporary features. It is important in the history of First Peoples, and the story of European settlement along its banks is a microcosm of that in Canada as a whole. The watershed contains many treasures, such as part of the Carolinian Forest, some of the best farmland in Canada, the spectacular Elora Gorge and a wealth of historic architecture.

Far more than that, the Grand is both uniquely itself and also typical of many of the planet’s rivers in the challenges it faces: issues of water management, farmland versus urban development, exploitation of natural resources and restoration of a polluted environment. Each of us lives in a watershed, and this is the story of our world.

In the images and words of two artists, The Grand River explores the river’s history, beginning with its formation after the end of the last Ice Age. The book gives insight into the private life of a river—the dialogue of land and water—as well as the ways in which a river interacts with humans, vegetation, wildlife, weather and the planet. It takes the reader on an imaginary journey from the Grand’s first drop of moving water at the source to the point where it flows into Lake Erie.

An artist is sitting on the bank of a river, drawing in a sketch book. He’s perched on a shooting stick; its tip, half-buried in the gravel, is only a few inches from the edge of the gently rippling water. Beside him on the ground lies a battered tin box, open, holding pencils, a pencil sharpener, an eraser.

The artist is Gerard Brender à Brandis; it is his wood engravings which you’ll see in this book. I’m a few yards away, sitting on a slope where the earth is padded with dry leaves and grass and twigs. Propped against my knees is a notebook. I look, listen, reflect, write. I record details of the scene in front of us. I listen for birds. I observe how water flows and how land and water meet. I think about water, I feel the air, I watch the clouds. Here are all four of the mediæval elements: earth, air, fire (the sun), and water—of which, in that ancient but by no means irrelevant conception, everything else was composed.

The river that we’re observing is the Grand, in south-western Ontario, but the story that this book tells is, by analogy, the story of many others because rivers the world over have much in common. This river valley is, in a sense, a microcosm of the biosphere and of the planet: the history of this river is that of the evolution of a landscape, of human settlement, of development and exploitation, of damage and reconstruction. A similar story can be told of many parts of the planet’s land surface, because that surface is a jig-saw puzzle of watersheds. Each of us lives in one. Every gutter along a city street, every culvert under a country road, every weed-filled ditch beside a farm field, every ravine and canyon, reminds us that we live in a watershed. Each watershed is three-dimensional—surface, underground, and air; it, and the environment that it holds in the palm of its hand, are created and sustained by rivers.

As well as being about the river’s biography in space and time, this book is about how two artists perceive the river and have come to understand its importance to the part of the planet that it flows through. In images and words we reflect on "riverness", the private life of rivers, the dialogue between land and water, the connections with vegetation and climate and weather, with humans and their works.

The story of the river and the watershed is a human story, a very Canadian one about First Peoples, exploration and immigration, immigrants and what they brought and created here.

(Continued in The Grand River...) A member of the Wood Engravers’ Network, Gerard Brender à Brandis has produced hundreds of drawings, wood engravings and watercolours of plants, landscape, buildings and musical instruments. These images have appeared in books, including Wood, Ink and Paper, At Water’s Edge and Portraits of Flowers(all published by The Porcupine’s Quill) as well as in his own handmade editions. His work is represented in the collections of the Royal Botanical Gardens (Hamilton, Ontario), the Missouri Botanic Garden, the Arnold Arboretum and the Hunt Botanical Library. His garden and his studio are located in Stratford, Ontario. Marianne Brandis was born in the Netherlands in 1938 and came to Canada in 1947. After earning her BA and MA from McMaster University, she worked in radio and taught at Ryerson Polytechnical Institute (now University) before becoming a full-time writer. Most of her work has a historical element. She is the author of award-winning historical fiction and has also written biography and memoirs. Pursuing her interest in the relations between people and their surroundings, she has researched and written about Toronto’s ravines, environmental and social issues in Malawi, and urban design and planning projects in her current hometown of Stratford, Ontario.