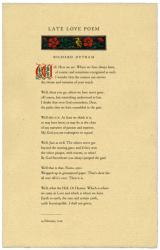 Richard Outram’s love for his wife Barbara Howard was the stuff of legend. Outram was also known as a ‘poet’s poet’ whose command of the English language as well as the intricacies of verse metrics could be daunting, if not impenetrable (to some, more than others). Outram had his acolytes, as well as his detractors. In this case we see the poet at play with trite colloquialisms ... ‘Here we are’, ‘there you go’, ‘this is it’, ‘Just as well’, ‘that is that’ and, finally, ‘what the Hell’. Perhaps the most challenging reference in the poem could be to the Latin QED (quod erat demonstrandum) which can be used as a synonym for ‘that is that’ or it can also be used in the somewhat edgier sense of ‘Up yours’.

The broadside, as it appears here set in Junius, was created for Valentine’s Day in 2016.