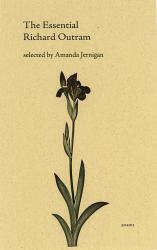 The Essential Richard Outram is an elegant, affordable selection of poems by one of Canada’s great poets. By turns theatrical and philosophical -- and often both at once -- Outram is always intimately attuned to the wonders and the workings of language. This volume gathers well-loved lyrics alongside poems unpublished in Outram’s lifetime: there is much here for both long-time readers of Outram’s work and readers new to his oeuvre.

Richard Outram, long celebrated as a poet’s poet, has increasingly found an audience among poets and layreaders alike. As much at home with the physical as with the metaphysical, he is by turns bawdy and decorous, sensual and ascetic. He is a virtuoso ventriloquist, speaking now as a reluctant sailor, now as a heartbroken prophetess, now as ‘a bloody great Indian elephant’; he even speaks, occasionally -- a rarer feat, this, than is commonly acknowledged -- as himself. The Essential Richard Outram is an affordable, pocket-sized selection that will introduce readers to a variety of Outram’s registers and personae.

When Outram died in 2005, he left behind him more than twenty books of poetry, many of these privately published with his wife, the painter and wood engraver Barbara Howard. The poems in these privately-published books, alongside the deeply personal lyrics that Outram chose not to publish in his lifetime, comprise a little-read oeuvre of great importance. Collecting a selection of these rarities alongside highlights from Outram’s trade-publications, The Essential Outramprovides a fuller sense of the arc of this poet’s career than has yet been made accessible in book form.

Since its inaugural year of 2007, the Porcupine’s Quill’s acclaimed Essential Poets series has celebrated Canadian poets and presented their work in an accessibly succinct and beautiful package -- sixty-four pages to introduce, reacquaint, provoke and enchant. The Essential Richard Outram is the seventh volume of the series.

Praise for The Essential Richard Outram

In her selections from the late Ontario poet Richard Outram’s more than 40-year career, Amanda Jernigan has crafted a mixtape of his poetry. Like any cherished mixtape, Jernigan’s selection allows for her own expression while also leaving her recipient’s own interpretation free to develop. Her goal isn’t didactic, but to compile Outram’s work that most affected her and then see how one responds to it. This is the purpose Outram’s own work, and makes Jernigan’s coy use of her own personal collection such an emotionally effective tribute. It’s about you, Jernigan and Outram all at once. The ever dualist -- with lines like, ‘‘Then let this moment, gentled, be / ephemeral as thought, / or disembodied love. It is. / And is not’’ -- the mix is only fitting for Outram.

The latest installment of the Essential Poets Series from the Porcupine’s Quill delivers in same manner as its predecessors. An elegant selection of poems from Outram’s extensive career provides the unfamiliar with a succinct glimpse of this great Canadian poet’s vision and versatility, while giving followers of his a warming selection deftly drawn from three decades of work and woven into a beautiful sequence of its own.

‘In The Essential Richard Outram, the writer’s formative poetic years are represented, in which formidable potential is shown nearly realized. True genius lies in his later poems. ... But his most affecting poems are those Outram never released in his lifetime, which are personal in a way only poetry can achieve.’

‘... Porcupine’s Quill’s "essential poets" series shares Laurier’s aims in bringing out the best work of Canadian poets in a convenient format, but it takes a less academic approach, one more appropriate to The Essential Richard Outram. Porcupine’s Quill has wisely asked poets, rather than academics, to choose the poems to be included, a tactic which has met with success, as with Robyn Sarah’s selection of Margaret Avison’s work the previous year. Younger poet and editor Amanda Jernigan delivers a high quality selection of Outram’s work which coheres beautifully in spite of the challenges of withdrawing individual poems from the carefully crafted sequences in which many first appeared. ... Outram’s poetic discipline is evident on every page of the collection, speaking gracefully through the compact iambic lines and rhyming stanzas which many contemporary poets studiously avoid or trivialize. ... Outram often oversees the drama he creates, waxing philosophical in a wry tone forced by the density of rhyme, his precise diction mixing plain language with rich vocabulary in tight quarters to stimulating effect not unlike that achieved by Avison herself.’

A Walk Before Bed

Out of the fragrant dark
and back again goes
the lovely reluctant arc
that the sprinkler throws.

From having striped the lawn,
descending white plumes play
awhile, aligned upon
the sidewalk, in our way.

And not just anyhow,
but fanned as the pre-set
eccentric cams allow.
I wait; you brave the wet. Outram was born in Canada in 1930. He was a graduate of the University of Toronto (English and Philosophy), and worked for many years at the Canadian Broadcasting Corporation as a stagehand crew leader. He wrote more than twenty books, four of these published by the Porcupine’s Quill (Man in Love [1985], Hiram and Jenny [1988], Mogul Recollected [1993], and Dove Legend [2001]). He won the City of Toronto Book Award in 1999 for his collection Benedict Abroad (St Thomas Poetry Series). His poetry is the subject of a significant work of literary criticism, Through Darkling Air: The Poetry of Richard Outram, by Peter Sanger (Gaspereau Press, 2010). Amanda Jernigan is a poet, playwright, essayist and editor. She is the author of Groundwork: poems (Biblioasis, 2011) and her work has appeared in Undercurrents: New Voices in Canadian Poetry (Cormorant, 2011). Jernigan lives in Hamilton, Ontario with her husband and son.