The House on Major Street 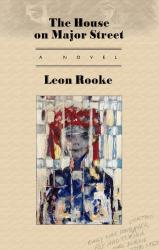 Populated by media personalities, literary characters, three-legged deer-like creatures and an array of idiosyncratic Toronto neighbours, The House on Major Street is an internal and external picaresque tale that begins with a dramatic bicycle accident and explores, along the way, the blurred boundaries between the stories we read, the stories we tell and the stories we live.

When free-spirited teenager Zan sets out on her bike to buy kitty litter she has no idea she’s about to send her neighbour and maybe-sort-of crush Tallis into a months-long coma, kicking off a series of events both real and surreal that will change everything and everyone on her Toronto Annex street. Metafictional appearances are made by characters as diverse as J. J. O’Molloy, Chekhov’s Ryabovitch, an infamous lapdog and the indignant Rebecca Whitehall, heroine of fictional Sheila Shott’s steamy romance novels. As these and a multitude of others interact with the inhabitants of 2X8 Major Street, friendships, dalliances and alliances are formed and re-formed with uncommon results. Unexpected guests arrive ... and stay. Two questions overarch: Will Tallis ever wake up? And what will that mean for everyone?

The one window of Tallis Haley’s second-floor room looks out over an exquisite garden. In this garden stands a fine sculpted fountain, erected overnight by unseen hands. So it seems. Because when Tallis Haley—the comet, man! Weird light! Watch that little shit go!—was removed from Children’s Hospital and restored to his own bedroom, the next-door site was a rubble-strewn field. He remembers this clearly. Yes, and rolling hills, trees, swollen streams. Teepees. Muskrat and chipmunk, buffalo!

From a high limb you could see all the way to Winnipeg. Turn a snitch and there is ... Buffalo.

Each night now, in the dead of night, no less than a dozen women perambulate, with elaborate cries of ecstasy and considerable expertise in the charm area. A dream. Oh, it’s a dream, by anyone’s account. Bewitching, yes, a joyful ceremony. And every night, you understand, which is hard on a boy in the comate status.

Chekhov is rumoured to abide here.

[Continued in The House on Major Street...]

Leon Rooke is an energetic and prolific storyteller whose writing is characterized by inventive language, experimental form and an extreme range of characters with distinctive voices. He has written a number of plays for radio and stage and produced numerous collections of short stories. It is his novels, however, that have received the most critical acclaim. Fat Woman (1980) was shortlisted for the Governor General’s Award and won the Paperback Novel of the Year Award. Shakespeare’s Dog won the Governor General’s Award in 1983 and toured as a play as far afield as Barcelona and Edinburgh. A Good Baby was made into a feature film. Rooke founded the Eden Mills Writers’ Festival in 1989. In 2007, Rooke was made a member of the Order of Canada. Other awards include the Canada/Australia prize, the W. O. Mitchell Award, the North Carolina Award for Literature and two ReLits (for short fiction and poetry). In 2012, he was the winner of the Gloria Vanderbilt Carter V. Cooper Fiction Award. He lives in Toronto.