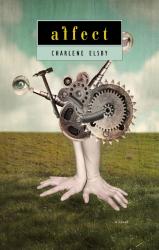 Affect is the surreal love story of a graduate student who, hyperaware of the absurdity of love in a universe where all is finite and death is inevitable, interprets the developing relationship through philosophy.

Have you ever met a person who actually seems larger than life? I did, once, just where you’d least expect him to be (standing around), in an environment you wouldn’t be able to fit him into (the courtyard outside the Philosophy building), if the concept meant what it implies. Such a being makes us question whether we are, in fact, so limited, with the one life and the one death, and nothing else to reasonably look forward to, whether the whole system is flawed, whether it’s not the case that they’ve cheated the system and come out on the other side of it still living, living more, doing something more than living.

That was Logan for me.

Affect is the story of a hyper-rational and unapologetically cerebral philosophy graduate student, obsessed with both death and Logan. Their relationship develops through a series of surreal events (in which corpses appear with disturbing frequence), where Logan comes to infiltrate the narrator’s psyche and occasions the collision of her interior and exterior worlds

Affect examines and interprets, in prose that is spare, poetic, and philosophical, how we think about life and death, time and distance, and the deeply affecting effects of an intense entanglement of a ‘one’ with an ‘other’.

‘Affect is an excellent work for those who are looking for alternative love stories, where maybe it doesn’t matter if things make sense or have meaning, but that seeing the way the moments unfold is worth giving a look. After all, it can take more than one glance to fully understand something, and another pair of eyes may see something else entirely than you.’

Space and time prevent us from seeing all sides of something at once. The spatio-temporal object defies objectification by being constantly inaccessible. We see its front and its back isn’t there. We turn it around and its front is its back and the problem comes back to the fore. What isn’t always half not there?

Nevertheless, the invisible side has an affect.

Logan isn’t visible from all sides, and I wouldn’t want him to be.

That’s two-dimensionality for you.

We used to confuse love and passion. Passion and action are opposed and in relation, they’d say. Action negates passion, they’d have to say, if they wanted to be logically consistent.

But not all who love are passive.

This book is about affections. The word is pathemata. We struggle to represent the pathemata of the psyche, because words only represent them from one side. You can’t contain anything in a word, nonetheless maintain it—not all of it, not all at once.

If there’s a word for him, it’s Logan.

Logan and I have chosen to direct ourselves towards the same universe.

As a result, our words all mean the same things.

This is pretty much how it happened.

Charlene Elsby has a Ph.D. in philosophy from McMaster University, where she worked on Aristotle’s notion of non-existence. She is the president of the North American Roman Ingarden Society and vice president of the North American Society for Early Phenomenology. She is the author of several academic works on metaphysics, ontology, aesthetics, literature, and logic. Her first novel, Hexis (Clash Books), was published in February 2020. She lives in Ottawa.