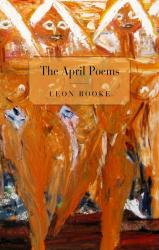 Leon Rooke’s latest collection of poems concerns itself with an irrepressible heroine, adopting a variety of distinctive perspectives on her life, her loves and her losses.

April is pluck, prink and plumelets. April is an intellectual colossus who travels with a shotgun under her dress. Marriage to April is like the beauty of pure math ... or like juggling bricks in a hurricane. April is a pearl of a girl, mother and daughter, lover and beloved. April has spit. April is A Developing Story.

In his newest collection of poetry, Leon Rooke, author of Hot Poppies, A Good Babyand the Governor General’s Award-winning novel Shakespeare’s Dog, presents a collection of poems about the beguiling, inimitable April. Adopting a variety of distinctive perspectives of her life, her loves and her losses, he builds a picture of his irrepressible heroine and the follies and foibles of the lives through which she passes.

Rooke’s poems challenge and amuse, stimulating the senses and subverting expectations. His inventive language and imagery, and his cast of delightfully idiosyncratic characters, allow him to hold up a mirror to society and expose the planes and angles of humanity, all the bumps and hollows of it.

– What was it that attracted you to April?
– How I was made dizzy through love. How I came to see beauty
in the strangest things. How modern art suddenly made sense. Her
pluck, her prink, her plumelets. Her elegant feet.
– That’s it?
– Clothes on the body, then the floor. I was eighty miles away
and saw her naked in bed. She was saying smart things. I licked blue
plates in cheap diners, thinking of her. Knowing that she was smarter
than me. She was an intellectual colossus, big, big, and bigger. Call
her up, you got busy signals, you got guys from Nantucket, Singapore,
the Darwinian Isles. Because of her I could speak the language of wild
dogs. Gypsies jumped from blackberry fields, shouting her name. Bees
sacrificed their own air time to fly with her. Even wasps.
– What was it about you that made her keen?
– She liked digging me out of holes, where insects buried me. I
introduced her to invisible birds which made nests out of her hat bands.
I was a man of action who went out nights in a flying suit, in dyed
underwear, stopping trains that otherwise would crash. I diverted
streams so they’d trickle by our bedroom. I was savvy in the kitchen,
slicing beets. I was a brave son of a bitch in the workplace,
turning hot-headed thugs into limited-edition songbooks, Fords
into schooners on Lake Huron. I enacted legislation making Mother’s
Day an extended foray through Greek isles.
– So you’re saying your marriage worked out?
– Like the beauty of pure math. What did she say?
– Like juggling bricks in a hurricane

Praise for The April Poems

‘To lose the one we love, through illness – how can we bear this? We can’t and we must. This is the wilderness, the wildness, of these poems; grief scours us and sorts through us; incomprehension and painful seeing. Few books are as brave as this one, with its “black hope”. Leon Rooke has always been language-mad for the world, in all its complicated grace. This book thrashes against loss and, in doing so, names a deep tenderness.’

‘The April Poems reveals the joy of loving – and the grief of losing – a “mature damsel” who travelled “with a shotgun under her dress” and boasted “Ideal cleavage too”. These poems and prose poems merge elegaic lament and rollicking lyricism to express the transcendent spirit of committed, coupled, household, marital love and the hurtful truth that is at “death do us part”. Supremely gifted in his art, Leon Rooke presents April and her husband Sam as exemplars of the casual, comic surrealism of real, everyday, domestic life. In this verse narrative that reads like a Federico Fellini film scripted by Lawrence Ferlinghetti, chuckles catch in the throat like sobs. Zany episodes contrast beautifully with sorrowful reflections: The April Poems underscores the madcap stress and exhuberance of marriage as well as the pitiful and maddening sadness that occurs when one of the couple passes away. It is a superb, poignant, and memorably humorous work, where April can declare her desire “to go at love / Like we were tractors clearing a road.”’

‘Leon Rooke has long been recognized as a great fiction writer, a master of the short story, a prestidigitator of tone, drama and humour. Fortunately, he brings these gifts to bear in his poetry, as well. As poet, Rooke is an outsider in the best sense – a mad scientist, a breeder of wily hybrids – immune to trends. In Rooke’s lines, there are shades of Pinter, Pasternak and Baudelaire. Read this book carefully, for it contains poems that can show us how to lose ourselves, and to recognize love, in any age.’

—Paul Vermeersch, author of The Reinvention of the Human Hand

An energetic and prolific storyteller, Leon Rooke’s writing is characterized by inventive language, experimental form and an extreme range of characters with distinctive voices. He has written a number of plays for radio and stage and produced numerous collections of short stories. It is his novels, however, that have received the most critical acclaim. Fat Woman (1980) was shortlisted for the Governor General’s Award and won the Paperback Novel of the Year Award. Shakespeare’s Dog won the Governor General’s Award in 1983. As a play, Shakespeare’s Doghas toured as far afield as Barcelona and Edinburgh. A Good Baby was made into a feature film. Rooke founded the Eden Mills Writers’ Festival in 1989. In 2007, Rooke was made a member of the Order of Canada. Other awards include the Canada/Australia prize, the W O Mitchell Award, the North Carolina Award for Literature and two ReLits (for short fiction and poetry). In 2012, he was the winner of the Gloria Vanderbilt Carter V Cooper Fiction Award. Recently, Rooke’s works The Fall of Gravity and Shakespeare’s Dog were produced in new editions for France and Italy, two countries where his work has been greatly admired.