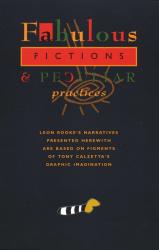 Fabulous Fictions & Peculiar Practices is a fantastical literary experiment in which text and image collide to form an irreverent satire of society’s indifference to the artist.

In Fabulous Fictions and Peculiar Practices, politics and economics sprawl comfortably alongside prurient dissertations on sex, marriage and aging as Leon Rooke and Tony Calzetta masterfully unfold a narrative of society’s indifference to the sorry plight of the artist. In this unique confluence of image and text, a pompous bank president delivers a rousing oration to his number cruncher clerks, and the painter Cézanne faces off against a disquieting muse and the cold rejection of the artistic community. Art critics, reveling in their own pedantry, find perverse enjoyment in professing ridiculous opinions. And God himself makes a cameo appearance—fearsome, irreverent and, it must be said, at times lecherous....

Satirical, playful and provocative, Fabulous Fictions is a madcap tour de force unlike anything you’ve ever seen or heard before.

‘I think of Rooke and Calzetta as the Brother Grim and the Brother Grin. In their drawn and written incarnations, these fabulous fictions put on the degree of perversity and exuberance necessary to their telling. They are full of knowing innocence and an elusive jouissance. They occupy the terrain of the fairy tale, the allegory and the folk tale, all literary forms of deceptive simplicity.’

Welcome gentlemen and ladies, and congratulations, you’ve gone through the stir and come out clean and cooked, the disabled unworthy have been cast aside, you’ve proven your mettle and are on the cusp of embattlement with mountains, climbing the ladder, to make no bones about it you are among the anointed. Tomorrow you will take up your multiple tasks in the greatest of kingdoms, the money kingdom, over which I and others of my likeness preside, preside by whit and whittle, looking after the nation’s business and keeping the world’s affairs afloat. You have every reason to feel proud and I’m convinced your training has taught you that our love for you, for you and your families, runs deep, it courses through you as veins course through millennia of rock, of effluvia, landslides, alterations of land mass occasioned by ice-age phenomena and other such marvels.

You are not here, though, for history lessons, there comes the time when you have taken from history all that can be profitably removed from it, you have seen this with your own eyes, I am sure, those old history buffs walking the streets in their worn-out shoes, their coats wormy at the elbows, that exhausted and defeated look in their faces, with nowhere to turn now that history has yielded its very last dribble onto their shoelaces. These are as men and women drowning in a sea of melancholy, unlike ourselves who drive unerringly onwards into a future divested of any possibility that those of our ilk may incur a loss, save that routine loss of loved ones, love that fails us, wives that desert us, as mine did, children that give themselves over to lawlessness, druggery, and drunkenness, as mine did, loss incurred through accident, a piano falls on you from a rooftop, the faint music of wind stirring the keys as in that final second your brother or sister looked up, tsunami and such that might assail our shores, earthquakes, no matter our vigilance against such terrors, these terrors will insert themselves in our lives, sickness too, such as yesterday my very own father suffering a deadly stroke as he strapped onto his wrist a new Rolex down at Cartier’s, above which he kept his delightful mistress, Agaza Strip, in a state of entitlement through forty-three stirring years. Not that I intend to dwell on such hazards, one day it rains, another it does not, that is about all one may say about such occurrences, in my own view God was blindsided some many aeons ago, he turns a deaf ear, we might assume he has his own difficulties, his goats have escaped the pasture, that sort of thing, vines have overtaken his many mansions, grey skies day after day, a kind of exaggerated Vancouver, if one chooses to be specific, he sleeps the sleep, that’s about the best we can say of him, his old head is granite upon the pillow, his wife and children occupy a madhouse wherein they may live in accordance with their needs, we need not dwell on this, we too, prince and pauper within the world of profit, have our difficulties and it is not on these that we must dwell, but rather upon the making of a better world as best as can be accomplished within our restricted means.

So, so, so, as tomorrow you take up your positions as number cruncher clerks in the bastions of power, knowing that long gone are the days when we could do with our clients what we wanted to do, which was to strike them beside the head with bricks the minute they came through our door, empty their pockets, and slide them through the coal chute on a slow boat to China, never to be heard from again, alas, gone are those days of the golden harvest, now we have no option but to cook our books in the civil and accepted manner, taking as our model the fine workings of our federal, regional, and local governments, finding a bit of gold here, a bit there, picking it up the way a street person lifts a nub of cigarette from the gutter, though still one penny makes another, the pennies mount up, you will have heard that our profit last year exceeded the combined budgets of 86 nations, not bad, I’ll say, when rules and regulations hem us in from every side, we are the tiger that must be caged, but the will has a way, so I say to you, gentlemen and ladies, go forth and prosper in the commercial world, make our bank proud, lift yourselves gaily from your crypt, I’ll merely remind you that tomorrow, Friday, is our "Informal Attire" day, you men may abandon your ties, you women may feel perfectly free to arrive at your station dressed in hardly anything at all, in fact we prefer this for its symbolism, you know, our historic "leave em naked" motto, "leave no stone unturned."

An energetic and prolific storyteller, Leon Rooke’s writing is characterized by inventive language, experimental form and an extreme range of characters with distinctive voices. He has written a number of plays for radio and stage and produced numerous collections of short stories. It is his novels, however, that have received the most critical acclaim. Fat Woman (1980) was shortlisted for the Governor General’s Award and won the Paperback Novel of the Year Award. Shakespeare’s Dog won the Governor General’s Award in 1983. As a play, Shakespeare’s Dog has toured as far afield as Barcelona and Edinburgh. A Good Baby was made into a feature film. Rooke founded the Eden Mills Writers’ Festival in 1989. In 2007, Rooke was made a member of the Order of Canada. Other awards include the Canada/Australia prize, the W O Mitchell Award, the North Carolina Award for Literature and two ReLits (for short fiction and poetry). In 2012, he was the winner of the Gloria Vanderbilt Carter V Cooper Fiction Award. Recently, Rooke’s works The Fall of Gravity and Shakespeare’s Dog were produced in new editions for France and Italy, two countries where his work has been greatly admired. Since receiving his BFA from the University of Windsor and his MFA from York University, Tony Calzetta has exhibited continually in solo and group exhibitions. He works mainly on canvas and paper and at times in sculpture and printmaking. In addition to commissioned works, he is represented in public, corporate and private collections in Canada, the U.S. and Europe. Tony Calzetta was elected as a member of the Royal Canadian Academy of Arts (RCA) in 2004.