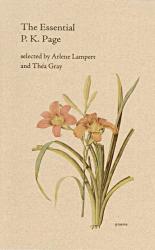 P. K. Page needs no introduction. This is a poet who writes in many genres and on an infinite number of subjects. The source of her poetry is always love – whether in vivid portraits of her inner and outer landscapes; startling insights into the past, the present, the future; illumination of some tiny detail of ordinary life; or admonishments for our neglect of the earth and of each other. Page is an alchemist who turns language into pure gold, a magician who dazzles with sleight of mind. The Essential P. K. Page is perceptive, elegant, romantic (yet never sentimental), sometimes downright funny, wholly conscious.

This is the second volume in our ‘Essential Poets’ series. Our aim is to provide the best possible introduction to a prominent Canadian poet by selecting key works that carry the essence of an individual poetic voice and sensibility. By offering a small but carefully considered selection it is hoped these chapbooks will invite an intimate acquaintance and ongoing engagement with the poems. Selected by Arlene Lampert and Théa Gray, the collection is admittedly wildly idiosyncratic and certain to be controversial. Arranged alphabetically for easy reference, these poems do not reflect a ‘young’ or a ‘mature’ voice; for Page, time is not linear and change does not occur along a narrow path. Think of this volume as a sort of pocket P. K. Page making its way into backpacks, carry-on luggage, doctors’ waiting rooms ...

‘... Northrop Frye uses the phrases ‘‘metallic glitter’’ and ‘‘imaginative wisecracks’’ to describe Page’s poems.... Those who enjoy ‘‘glitter’’ in poetry will appreciate the diction, imagery, and acoustics of Page’s phrasings, as in ‘‘Evening Dance of the Grey Flies’’.’

‘Born in England, Patricia Kathleen (P. K.) Page moved to Canada in 1919, at the age of three. She has lived in New Brunswick, Quebec, Manitoba, and Alberta and now makes her home in British Columbia, in the capital city of Victoria on Vancouver Island. At age 92 she is writing more than ever. This latest collection of her poetry, The Essential P. K. Page, is aptly named. Any fan of her work, of Canadiana, of poetry in general, needs to own this book. The works contained within are dense and chewy, both requiring and creating thought, and keeping all five of the reader’s senses involved in the pleasure of reading them. What makes Page’s poems so unusual is their apparent rejection of the idea that thought and emotion, thinking and feeling, are different and must be kept separate. P. K. Page thinks with her heart, loves with her mind, and leaves us a wonderful, tangled mess of imagination and possibility. I hope she lives well into her triple-digits, and brings us many more portraits painted as beautifully, as movingly as The Essential P. K. Page.’

The Essential P.K. Page is ... a relief. It’s a reprieve to hold in one’s hand a compact 60 pages featuring the most memorable, most confounding, most rereadable poems written by Page.

‘Facing the fact of Page’s entire oeuvre can be daunting; it contains little apprentice-work, few throwaways. The Essential P. K. Page is in this sense a relief. It’s a reprieve to hold in one’s hand a compact 60 pages featuring the most memorable, most confounding, most rereadable poems written by Page, arranged alphabetically -- each allowed its own space, unencumbered by time or category.’