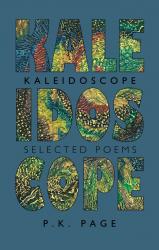 Kaleidoscope is the first in a series of ten volumes to be published over the next ten years as a complement to an online hypermedia edition of the Collected Works of P. K. Page. Listed chronologically by date of composition, the poetry in Kaleidoscope is fluid, wondrous and technically exquisite, drawing on subjects great and small, and it offers a comprehensive look at one of Canada’s most beloved and brilliant poets.

The name P. K. Page is synonymous with ‘artist’: she won the Governor General’s award for poetry in 1957, was appointed a Companion of the Order of Canada in 1999, and her paintings are found in the permanent collections of the National Gallery of Canada and the Art Gallery of Ontario, among others. Her voice is luminous, her focus grounded in reality, and her mastery of poetic form is nigh unmatched in Canadian literature.

Selected by Zailig Pollock, the poetry in Kaleidoscope is elegant, technically exquisite and full of marvels, and the chronological presentation reveals Page’s growth as a poet over her long lifetime. This collection is more than a mere re-publishing of previous work; Kaleidoscopeincludes poetry hitherto unpublished, and Page involved herself with the process of editing certain pieces until her death in January 2010.

Kaleidoscope: Selected Poems is the first in a series of volumes to be published over the next ten years as a complement to an online hypermedia edition of the Collected Works of P. K. Page. The online edition is intended for scholarly research, while Kaleidscope offers a beautiful and inspiring text to be enjoyed by those who love and wonder at the achievement of Canada’s greatest poet.

There’s something in this collection to spark new interest, remind those familiar with her well-loved lines and introduce readers to her evolving style over the years. From the dazzling word-work of the early poems, to the gorgeous complexity of her glosas, her skill at fitting line to image and colour to sound is nothing less than stellar -- especially in the way she could make rhyme steep in the vowels and tickle at the back of the mind. Musicality and understanding of rhythm pervades her work. From her beginnings as a poet with an imagistic approach, to the broadening and deepening of the later years, these spiritual, seeking, overcoming poems are compelling. Privileging natural imagery and a disillusionment with contemporary obsessions, the poems reveal a poet who rarely falters.

What the book presents is a poetic tour de force. It illustrates how firmly accomplished Page’s work was from the beginning of her career.

‘If you are interested in seeing the developments in the long career of an exemplary poet this book is a gem. If you want to celebrate World Poetry Day by enjoying the products of a fertile, original mind, again, this book is for you. As Page is a wonderful Canadian poet who needs to be even more widely read, this collection of her work is something I will be recommending for all poetry lovers for a long time to come.’

‘Whether in this print edition--the first in a ten-volume series of Page’s Collected Works--or the forthcoming online compendium, Kaleidoscope marks a stunning representation of Page’s career. Readers new to her work will quickly find themselves situated, thanks to a thorough introduction and comprehensive textual notes; those already acquainted with Page have her unpublished work to discover. As the poet passed away early last year, the collection serves as a commemorative retrospective as well as a book of poems that explores humanity’s darker moments even as its playful diction reminds us of life’s joys.’

In the dream it was the seraphim who came
golden, six-winged
with eyes of aquamarine
and set my hair aflame
and spoke in a language which written down --
an elegant script of candelabras and chalices --
spelled out my name
but it was not my name
The mornings following were bright as wings
sky’s intricate cirrus
the feathers under his wings
the wind’s great rush
the bladed beat of his wings
Mare’s tails traced the passage of his seraphic chariot
Hummingbirds ruby-throated roared and braked
in the timeless isinglass air and burned like coals
high in the fronds of a brass palm sunbirds sang
girasoles swung their cadmium-coloured hair
and I heard the seraphim telling once again
the letters of my name
but my name was lost in the spoken syllables