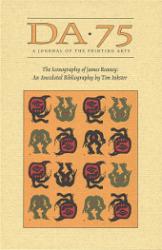 The Iconography of James Reaney: An Anecdotal Bibliography by Tim Inkster

For more information about the contents of this issue and for a photograph of George A. Walker at the launch of The Wordless Leonard Cohen Songbook, please push the arrows in the bottom right of this window.

The issue includes Shane Neilson’s profile of David Brewer and Rabbittown Press in Fredericton, New Brunswick, with a focus on the Rabbittown edition of Bliss Carmen’s Low Tide on Grand Pré and a short discussion on the complexities of translating books from page to screen.

DA 75 also contains a sampler of images from The Grand River, a book of wood engravings and texts by Gerard Brender à Brandis and Marianne Brandis.

Kandid Kamera showcases a variety of special events including the launch of Alan Stein’s Viewfinder, the launch of George A. Walker’s The Wordless Leonard Cohen Songbook, and the Alcuin Awards night.

The cover image is adapted from a design by Paul Arthur that appeared on the case of James Reaney’s The Red Heart (1949). 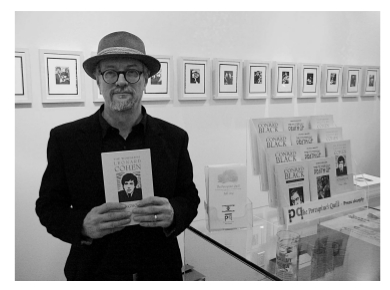