The Emblems of James Reaney 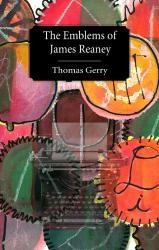 Thomas Gerry investigates the unique artistic vision of poet, painter and playwright James Reaney, revealing the ‘magnetic arrangement’ that links Reaney’s emblems with some of his best-known fiction, poetry, drama and artwork.

The literary emblem can trace its roots back to sixteenth-century English collections, which sought to reconcile classical philosophy with Christian doctrine. Consisting of images and verses, emblems challenged readers to use their wit and knowledge to deduce the connection between the visual and the textual. In The Emblems of James Reaney, former Reaney student and professor Thomas Gerry draws on his own considerable wit and knowledge to help readers understand the myth, mystery and meaning behind ten literary emblems, published in 1972 as ‘Two Chapters from an Emblem Book’ by poet, playwright and painter James Reaney.

Gerry conducts an exhaustive investigation of the ‘magnetic arrangement’ that links each emblem with some of Reaney’s best-known fiction, poetry, drama and painting. His detailed analysis of the visual and verbal aspects of each emblem draws on alchemy, biblical mythology and Haitian voodoo. By referring to the influence and inspiration that Reaney drew from William Blake, Edmund Spenser, Northrop Frye and Carl Jung, Gerry reveals the overall cycle of meaning behind the emblems and shows how Reaney marries the opposing concepts of art and experience into a unified artistic vision.

The Emblems of James Reaney presents a fascinating organizational scheme within which to study some of Reaney’s most beloved works, encouraging readers to frolic in the playbox of Reaney’s imagination and to revisit his work – and Canadian literature – with new eyes.

Praise for The Emblems of James Reaney

‘Thomas Gerry’s insightful investigation of the emblems of James Reaney’s work is itself a magnetic read. He offers us a very persuasive argument about the grand unified theory behind all of Reaney’s artistic output, showing clearly the essential tensions between the documentary and the mythic; the sacred and profane; the symbolic and the practical; the child’s play and the adult’s labour; the image and the word: tensions that were all primal forces within James Reaney’s creative journey.’

‘James Reaney’s ten emblems are among the most mysterious of his works. Are they poems? works of art? performances? And how did they emerge from Reaney’s fabled “playbox”, the imaginative source of everything he did? In this rich new study Thomas Gerry explores the emblems, both published and unpublished. Each one is illuminated by its setting among other closely-related Reaney poems and plays, by the poet’s intellectual debts to Blake, Jung and Frye, and by his practices as a visual artist. Reaney’s erudition is matched by Gerry’s investigation of the ancient emblem tradition, and his sensitivity to the central motive of Reaney’s multifaceted creative life: to challenge us to perceive actively, magnetically. In doing so Gerry unveils the resources of one of the richest texts in Canadian poetry.’

—Germaine Warkentin, Professor Emeritus at the University of Toronto in the English Literature department

‘We learn to draw (scrawls, squiggles, a person, a house) before we learn to read or write. It was characteristic of James Reaney in mid-career to produce his emblem poems, thereby not only joining a long tradition but also illustrating (with scrawls, squiggles and various more identifiable images) the main preoccupations of his poetry, plays, libretti and paintings–the basics of his art, in effect. Thomas Gerry has performed an original exercise in brilliantly examining the ten emblems in relation to specific Reaney works in other forms. His observations are meticulous and wide-ranging, and they illuminate Reaney’s oeuvre in new and fundamental ways. In particular, I appreciate his citations from Rhoda Kellogg’s studies of children’s art (known to Reaney) and I find it refreshing that he deals at length with Reaney’s activities as an opera librettist, seldom touched on by other commentators.’

—John Beckwith, Member of the Order of Canada, Professor Emeritus at the University of Toronto in the Music department

Man is man’s ABC: there is none that can
Reade God aright, unless he first spell Man. . . .
—Francis Quarles, Hieroglyphike1, 1638

The Emblems of James Reaney explores ways in which these emblems are key to understanding Reaney’s poetry, plays, librettos, fiction, essays and paintings. Since the artistic vision intrinsic to all of Reaney’s works is especially intense in his emblems, they offer an effective organizational scheme, a series of starting points, to explore a further range of his productions – not all of his works, but the ones attracted most readily by the emblems.

Technically the emblems resemble woodcuts; Reaney lettered and drew them in ink with pen and brush. Five of the emblems were first published in Chicago’s Poetryjournal in 1969. In 1972 they were reprinted, along with a further five emblems, as ‘Two Chapters from an Emblem Book’ in Reaney’s Poems. These two chapters are actually all that were published, although there are several unpublished emblems by Reaney in private collections. The emblems bring to Canadian literature the sixteenth-century European and seventeenth-century British Protestant tradition of emblem making, and also transform that tradition in the context of twentieth-century Canada. There are many variations, but an emblem is essentially a hybrid production: a picture with a title or motto, and an accompanying text, usually a poem. Readers are expected to use their wit to formulate the relation of the picture to the words.

A challenge facing anyone who attempts to articulate the meanings of James Reaney’s work is that so much is involved, even though the work itself at first might seem uncomplicated. In some ‘Production Notes’ for Listen to the Wind, Reaney observes that ‘The simpler art is, the richer it is’ (141). This maxim certainly applies to his emblems. While his creations are based on his sophisticated understanding of English culture from the Renaissance to the Modern period, as well as his encyclopaedic knowledge of Ontario’s culture, nevertheless Reaney’s writing and artwork are in some ways child-like: they toy with words and images, and draw audiences and readers into their playful worlds. His entire book of Performance Poems (1990) is prefaced with Reaney’s ostensibly casual invitation to ‘try out these new pieces as a way of giving groups of people an experience of poetry’s power to reach out and focus an audience that may have long forgotten how nursery rhymes and street games stir up the soul with the joy of unifying so many of the senses, so many of your friend-circle’ (3). The meaning of the pieces, Reaney suggests, is the shared experience of remembering and finding joy. The phrase ‘groups of people’ highlights his wish to bring performers and audiences together into community. Individually, remembering in some depth calls for research, depending on one’s level of curiosity, and the efficiency of one’s memory; just who is this ‘Sir Charles Goddam Roberts’ [8] anyway? Reaney’s elaboration of the joyful experiences of poetry as ‘unifying so many of the senses’, also suggests why he inclines to multi-sensory, multi-art creation, such as emblems, plays and opera, with their texts, images and sounds. Thomas Gerry launched a successful career as a Professor of English at Laurentian University in 1988. Currently, Gerry sits on the advisory board for Studies in Canadian Literature, reviews books for scholarly journals and has published numerous poems and articles – and even several music recordings. His fascination with interdisciplinary topics has led him to research the works of Anna Jameson, Elizabeth Simcoe, Joni Mitchell, David Milne and others who write as well as create visual art. He has produced several articles on the subject, including one about Reaney, which is the genesis of The Emblems of James Reaney.

Gerry continues to teach courses in Canadian thought and culture, literary and critical theory, and English literature at Laurentian University. Upcoming projects include further studies of text and images by Anna Jameson and Elizabeth Simcoe, as well as a forthcoming book by Mercedes Luanco entitled Una Experiencia Sorprendente: Aprendiendo a Pintar / The Story of an Encounter: Painting My New Way that he edited and co-translated with Jorge Virchez for Scrivener Press.