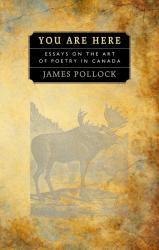 From critic and poet James Pollock comes You Are Here, an incisive collection of essays that explore the newer, more cosmopolitan and technically sophisticated generation of Canadian poets.

Northrop Frye wrote that for Canadian poets the question of identity isn’t so much ‘Who am I?’ as ‘Where is here?’ In his ground-breaking book, James Pollock gives his answer: that where we are as a literary culture has a great deal to do with our relationship to elsewhere. For far too long, Canadians have refused to read our poetry in the larger international context of poetry as an art, leaving our poets isolated and ignored. Pollock sets out to situate our verse on the map of world poetry – a map which, like one of those incomplete globes from the sixteenth century, still leaves Canada largely uncharted.

Acutely intelligent and unflinchingly honest in its judgements, You Are Here is an eye-opening guide to the new world of Canadian poetry, sensitively exploring the work of such poets as Anne Carson, Daryl Hine, Jeffery Donaldson, Karen Solie and Eric Ormsby. The collection ends with a witty treatise on good criticism, and a passionate and learned reconsideration of poetic values, making You Are Here an essential companion for students and lovers of Canadian poetry everywhere.

Praise for You Are Here

‘You don’t have to be as delighted as I am by James Pollock’s advocacy of Daryl Hine and Anne Carson as two of the most accomplished of living Canadian poets to recognize You Are Here as the most compelling enquiry into the current state of poetry in this country since Northrop Frye’s omnibus surveys in the 1950s. This is a book I’ve been waiting to read for most of my adult life.’

—T.F. Rigelhof, author of Hooked on Canadian Books: The Good, the Better, and the Best Canadian Novels since 1984

‘You Are Here: Essays on the Art of Poetry in Canada is an elegant salvo in the ongoing guerilla war against Canada’s complacent (and sometimes incompetent) poetry culture. Erudite but always accessible, Pollock is a critic who belongs to the best kind of old school: the sort whose members write clearly, can teach you a thing or two and have the nerve to have an opinion.’

Living as I did in Toronto in the late eighties and early nineties I rode my share of public transportation, and I often found myself perusing the glowing, back-lit advertising signs in subway stations and bus stop shelters. I vividly recall a campaign for a cough medicine called Buckley’s Mixture. Apparently this witch’s brew contained no alcohol, sugar, or pleasant flavour of any kind. The ads varied – one invited readers to ‘Open wide and say ‘‘@#$%&*!’" – but all ended with the same slogan: ‘It Tastes Awful. And It Works.’ What a brilliant intuition, I thought. To sell medicine in puritan Toronto, you emphasize how bad it tastes. The campaign was a spectacular success.

In my undergraduate literature classes at York University I spent years on end luxuriating in Homer, Chaucer, Shakespeare, Milton, Whitman. As a neophyte writer, however, I was also eager to discover what my compatriots were writing, and so, during my almost daily explorations of the campus bookstore, I would spend some time digging into anthologies of Canadian poetry and fiction, and the new issues of Canadian literary journals, and whenever a visiting writer came to the campus to give a reading, I was there. The hype was loud. Margaret Atwood was a world-famous writer; bpNichol was the greatest living member of the Canadian avant-garde. But as I read around, searching for a great Canadian poet, as I sat in the audience listening to Atwood’s mildly amusing monotone wit, and Nichol’s feral grunting and snarling and endless puns, it began to dawn on me that something was terribly wrong. These poets – not just Atwood and Nichol, but the names I stumbled across in anthologies and journals – were not very good. A lot of them were astonishingly bad. And yet they were being published and celebrated everywhere. I had to face the truth: their poetry tasted awful. But I’d be damned if it didn’t seem, at least as far as their reputations were concerned, to work.

Two main kinds of poetry were being published in Canada at the time. One was a rough, dull, plainspoken lyric poetry in casual free-verse, either autobiographical or mythically didactic: Atwood, Al Purdy, John Newlove, George Bowering. The other was a loopy avant-garde sort of composition whose main qualities were tedium and incoherence: Nichol, Fred Wah, Steve McCaffery. This second group differed from the plain-spoken free-verse poets in part by surrounding their writing with a lot of pretentious theoretical bombast, and they seemed to go on forever repeating the same experiments that avant-gardes in Europe and the United States had been conducting for decades, without very interesting results.

On some days it made me depressed, on others furious. During my excursions downtown, I would often see a miserable-looking guy standing outside Sam the Record Man on Yonge Street. He was always holding a small stack of stapled chapbooks with one propped up on top so you could read the cover, announcing its title in big black handwritten letters: Shit. I never saw anyone slow down to take a closer look. It was the mirror image of the avant-garde literary magazine I’d encountered in the university library from a generation earlier, with its stupefying anagrammatic title, Tish. There you have it, I said to myself: the two main pipelines in the sewer of Canadian poetry.

It was partly an illusion, fortunately. There were some gifted Canadian poets out there, including my teachers at York, Don Coles and Elisabeth Harvor, but most of them were forgotten or ignored. I’d never heard of Daryl Hine, for example, or Richard Outram, or Robert Allen. I felt claustrophobic. Here I was living in the largest city in Canada, reading some of the greatest literature of the Western world, and yet the provincial isolation of my own literary neighbourhood was overwhelming. If I were going to be a writer, I felt, I would have to leave.

So I moved to the United States for graduate school – this was twenty years ago now – started publishing poems and reviews, got married, and took a job as a professor in the American Midwest. But I never forgot my Toronto claustrophobia. And over time, in thinking about the art and theory of poetry, I began at last to understand the causes of that literary malaise.

One crucial factor was the xenophobic literary nationalism of the time, which, while mitigated somewhat, still runs deep in certain quarters even now. That attitude is the target of one of the pieces in this book. But there was, and is, a deeper problem: a lack of clarity in our thinking about poetry. The final essay here is an effort to address this problem head-on by considering the question of poetic value.

It’s true that much has changed for the better in Canadian poetry in the last twenty years. A healthy crop of excellent new poets has emerged in Canada. And a few good new poet-critics have begun not only to respond to these poets, but also to undertake a desperately needed revaluation of the past. This has resulted, for example, in Evan Jones and Todd Swift’s extraordinary revisionary anthology, Modern Canadian Poets, a review of which I have included here. As a devoted reader of Canadian poetry, I am encouraged by these developments. But a great deal still remains to be done.

This book – a collection of reviews and essays written over the last seven years – springs from two desires. First, to reconnect Canadian poetry to the larger context of poetry as an art. Second, to situate some of our poets on the map of world poetry – a map which, like one of those incomplete globes from the sixteenth century, still leaves this country largely uncharted.

My title – taken from a poem by Jeffery Donaldson called ‘Bearings’ – alludes to Northrop Frye’s remark that, for Canadian poets, the question of identity isn’t so much ‘Who am I?’ as ‘Where is here?’ My conviction is that where we are as a literary culture has a great deal to do with our relationship to elsewhere. If this book helps readers begin to answer that question about Canadian poetry and the particular Canadian poets I discuss herein, it will have done its job. James Pollock grew up in southwestern Ontario. He is a graduate of York University and completed his doctorate at the University of Houston where he held several fellowships in poetry. He was a John Woods Scholar in the Prague Summer Program at Charles University in the Czech Republic, and a work-study scholar at the Bread Loaf Writers’ Conference in Middlebury, Vermont. Pollock’s critical reviews and essays have appeared in journals on both sides of the border, including Contemporary Poetry Review, Arc Poetry Magazine, The New Quarterly, Books in Canada, Literary Review of Canada and Canadian Notes & Queries. His poetry has been published in The Paris Review, The Fiddlehead, Poetry Daily, Canadian Literature, AGNI, Maisonneuve, Southern Poetry Review, Geist, The Del Sol Review and elsewhere. In 2010 he was listed inBest Canadian Poetry. He is an Associate Professor at Loras College, in Dubuque, Iowa, where he teaches creative writing and Canadian literature. He lives in Madison, Wisconsin.