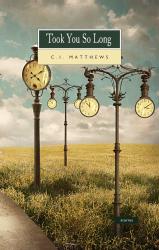 Took You So Long presents emotionally resonant stories about challenging relationships and deeply flawed characters mired in the circumstances of their everyday lives.

Often out of sight and certainly out of mind, the characters in Took You So Long inhabit the landscape of the Saugeen watershed south of Owen Sound, in the lee of Lake Huron

A morel-seeking gastronome falls into a gopher hole and reflects on the multiple facets of restraint. A donation-bin picker is on the hunt for her next great find—and husband number four—despite cohabitating with three of her exes. A lonely widower discovers that his robotic full-service companion makes him lonelier than ever. A son’s hunting trip with his father forces him to confront the terrible certainty of physical decline.

Compassionate, honest and propelled by forceful emotion, Matthews’s stories ask us to question who we are, where we belong, and how we move on in the face of adversity.

Kathryn Maxwell tumbled into a hole right after lunch. It wasn’t much of a lunch, just reheated sausage, a slice of day-old bread, and half a can of beer left over from the night before. All morning, she’d had her sights set on sinking her teeth into something better than leftovers, something shamelessly succulent.

She’d been obsessing about getting her hands on morels. The fungi sprang forth after the long winter under a grove of burr oaks in the far corner of her ten-acre property. The spot was shady and moist, ideal conditions for morels. Kathryn hated paying good money at the Farmer’s Market for something she could get for free.

If she picked the morels when they were small and young, there was nothing like them. Sautéed in butter and crushed garlic, the nutty meaty flavour titillated the taste-buds. The distinctive honeycomb ridges, a French tickler of pits and caps, offered an orgasmic delight.

True, they were a pain to clean, but Morchella with its unique anatomical perfection, guaranteed a climax without the mess and aggravation of sex.

On this particular Saturday in May, however, instead of picking morels, Kathryn was breast deep in a hole reminiscent of a mineshaft. It was a sinkhole—straight, long, and, for all Kathryn knew, bottomless. One thing for sure, her feet were not touching anything. So the bottom could be six inches below her toes, or it could be the hole went down for miles. Luckily, her child-widened hips were wedged against a rock or something. Otherwise, her whole body might have fallen in.

As it was, her head and shoulders were sticking out of the hole and her arms were splayed out on either side. No wonder she’d missed seeing it; the hole was shrouded by ferns, the leaves enormous, at least from her ground-level point of view. She reached for several stalks hoping to gain some leverage, but the ferns uprooted when she pulled on them.

She reached for the basket she’d been holding when she fell in. It had landed not too far away. Straining and stretching her left arm as far as it would go, she managed to grasp the wooden handle and drag the basket towards her. Then she wedged it across the narrow space between her breasts and the edge of the hole. But the basket was made for carrying morels and broke when she put her weight on it.

After a while, she found herself thinking about Norman, her neighbour and periodic lover. Not that the hole she was in had been made by gophers but she’d been after him to shoot whatever the hell was making holes all over her property. He was reluctant to raise a .22 at them as his eyesight wasn’t what it used to be.

There was a time she went to the trouble of setting live traps. But that was then, and now she was the one who was trapped.

[Continued in Took You So Long] C. I. Matthews has variously worked as a chambermaid, potato peeler, data entry operator, teacher, and vice-principal of special education programs. Her writing has appeared in regular columns for the Walkerton Herald-Times and SPOTLIGHT West Grey, as well as in anthologies and literary magazines in Canada, the USA, the UK, Australia and South Africa. She lives and works on a large rural property near Chesley in Bruce County, Ontario.