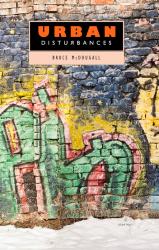 In Urban Disturbances ordinary characters reveal through their stories the infinite possibilities of our common humanity.

A dispassionate lawyer experiences mixed feelings about talking a man out of jumping off a bridge. A respected philanthropist begins to buckle under the weight of a shocking secret. A determined woman crafts a meticulous plan to bag a rich husband. Jack (of beanstalk fame) discovers the maiden in the tower—and happily ever after—aren’t always all that they’re cracked up to be. These characters and others are at once painfully ordinary and deliciously absurd, often relatable and occasionally irredeemable. They navigate complicated relationships and contend with their own self-destructive behaviours, all the while clinging to essential, very human, desires: to be noticed, to be wanted, to be loved, and occasionally, when the situation calls for it, to get what they deserve.

From ‘Birding with Dad’

The last time Paul went for a walk with his father, they’d descended from their fifth-floor apartment and trudged into the hydro field behind the building, pushing through the long grass until their pant legs were damp and covered in seeds. Before they reached the other side of the field, his father twisted his ankle in a gopher hole and had to lean on his son as they made their way home again. Paul had felt proud to feel his father’s weight on his shoulder, but his father had been grumpy for the next week.

Paul liked it when his dad included him in his walks. It made him feel hopeful and mature, as if his father regarded him as a trusted partner rather than a nuisance or an agent of his mother. This evening, he let Paul run ahead of him along the path that led from their apartment building through the hydro field. The sun was starting to set. A man with a dog angled through the long grass ahead of them toward a barrier between the field and a dead-end road. The man loaded his dog into the back seat of a black car and drove away. Paul plunged ahead of his father into the thick grass, then returned to the path and waited for him to catch up. The damp grass soaked his canvas running shoes. Small green seeds stuck to his arms.

Black cables hung between the outstretched metal arms of the hydro towers like skipping ropes in a game played by skeletal giants. Standing near the base of one of the towers, Paul and his father gazed upward into the maze of metal beams and porcelain insulators until they spotted a birds’ nest wedged into a corner. Paul’s father took a slingshot from his pocket. He picked up a rock and fired it at the nest. He tried three times, but each time he missed the nest. He handed the slingshot to his son. ‘You try,’ he said.

Paul kicked at the dirt around his feet until he found a smooth pebble. He looked up at the nest, placed the pebble in the leather pouch of the slingshot, pulled back on the rubber bands and fired. The pebble struck the bottom of the nest. The nest dangled above the ground like a spectator’s dislodged hat. Paul could see a cluster of chicks clinging to the ragged edges of the nest. They squeaked like rusty hinges as they blindly opened their beaks, waiting for food. ‘Try again,’ his father said. When Paul hit the nest a second time, one of the chicks spilled to the ground. Paul’s father walked over to the stunned bundle of feathers. He looked down, raised his boot and stepped on the bird. ‘Sometimes I’d like to do this to your mother,’ he said, and then he made a guttural sound intended as laughter.

In the pause between his father’s words and his chuckle, Paul caught a glimpse of his father’s anger. It was no joke.

His mother was leaning against a satin pillow propped against the headboard, blowing on her nails. There was a bottle of nail polish on the table beside the bed. She was wearing a pink slip that left the tops of her breasts exposed. Paul said, ‘I should sleep in my own bed.’

‘Who told you that?’ his mother said.

His mother sighed. ‘How many times do I have to tell you?’ she said.

Paul had heard the same story from his mother many times. It all began, she told him again, with her wish to protect him from harm. ‘The world can be a dangerous place,’ she said.

‘These stories, about small people coping in and beyond an irascible city, take shape like songs. As the melodies float up and hang in the rafters, their truths linger.’

—Don Rooke, musician and founder of The Henrys

‘In his engrossing, cut-diamond collection of 18 finely observed short stories, Bruce McDougall captures with a tough-minded empathy the existential plights of the anonymous low and vainglorious high, the innocent and venal, the fragile and incorrigible, the petty and profound.

‘Moving from realism to fable, from the luckless working stiff to self-deluding philanthropist, his characters randomly intersect and collide, only to fall back into their class bubbles, each and all "wearing their destinies like a layer of dust."

His lacerating satirical jabs are worthy of Jonathan Swift. Sudden, sharp turns of phrase catch you like a left hook, and we are left experiencing the ordinary surfaces of life as extraordinary—no ordinary achievement.’

—James FitzGerald, author of What Disturbs Our Blood: A Son’s Quest to Redeem the Past, winner of the 2010 Writers’ Trust Non-Fiction Prize Bruce McDougall has been a freelance writer for more than 30 years. A graduate of Harvard College, he served as an editor of The Harvard Lampoon and attended the University of Toronto Law School before becoming a full-time writer. He has written or co-written more than twenty non-fiction books, including The Last Hockey Game (Goose Lane, 2014) and biographies of Canadian poet Charles Mair; Canada’s first detective, John Wilson Murray; and business giant Ted Rogers. He has also published a collection of short stories, Every Minute Is a Suicide (Porcupine’s Quill, 2014). His essays have appeared in The Antigonish Review and his fiction in Geist, subTerrain and Scrivener. He lives in Toronto.