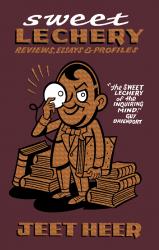 In Sweet Lechery, cultural journalist Jeet Heer offers a quirky collection of literary criticism that touches on a wide range of contemporary topics.

Rich with contextual detail and social commentary, these essays examine the cultural, historical and political forces that inform the books we read and write.

Books are work, essays are play: as I toyed with this formulation, I realized this is a generalization even the most incompetent hunter could easily shoot full of holes. The world is full of playful books (everything from Tristram Shandy to Pale Fire) as well as laborious essays (written by the likes of Samuel Johnson and Susan Sontag). Yet if the dichotomy doesn’t work as a universal law, it still rings true as a credo: for me, personally, essays are play. I don’t see essays as having the deadly finality of scholarly monographs, where hefty authority sometimes smothers the subject. Rather, the job of an essay is to survey a topic and return with a quick and entertaining report.

The essays in this book deal with a wide array of topics including the economics of John Maynard Keynes (and its possible relationship to his sexuality), the political philosophy of Leo Strauss, the cartooning of John Updike, the literary theories of the Central Intelligence Agency, the entrepreneurial acumen of Alice Munro, and Philip K. Dick’s attempt to become an FBI informant.

What unites the book is not the topics covered but the approach: the goal in each case has been to open up a new lines of attack, to paint familiar scenes from hitherto unused perspectives, to find connective links that might previously have been unseen. In sum, the agenda is to keep the spirit of intellectual play alive during the course of an investigation.

My title is taken from the first story in Guy Davenport’s first story collection Tatlin!: "We must shatter the glass wall that Socrates and Aristotle placed between nature and the sweet lechery of an inquiring mind." Davenport, that playful polymath, is a presiding spirit in these essays. To even claim him as a model is presumptuous. I possess only a miniscule fraction of his learning and a shade of his talent. Yet his ebullience and free-spiritedness can perhaps be emulated.

To be playful is not the same as being frivolous, nor does it mean we have to deny the reality of suffering. These essays take up some weighty political and social issues—the legacies of war and oppression, the damage done by bigotry, our responsibility to the natural world. In dealing with these sombre matters, freshness of voice might allow us to confront realities that we otherwise shut our ears to.

To give some order to this fugitive round-up, the essays are gathered together in some rough and ready categories dealing with general cultural politics, Canadian culture, the politics of the conservatism, science fiction, and comics. These groupings are only approximate. Many essays could easily overstep the boundaries I’ve set. Margaret Atwood shows up as a Canadian writer but the essay on her could easily be moved to the section on science fiction. Hugh Kenner is also carded as a Canadian, although he wouldn’t be out of place with conservative intellectuals like Leo Strauss and Hilton Kramer. Guy Davenport and John Updike are placed with the general cultural essays although both could fit snugly into the company of cartoonists.

One of the most significant events of my life was a border crossing. As a child I immigrated to Canada with my family. Perhaps that’s why I’m fascinated by intellectual borders, the closely guarded zones where competing values are staked out. I keep returning to the contested territory where politics and culture meet. For me, culture always has political implications just as politics always has a cultural resonance.

To be completely apolitical and only live for culture is to risk becoming a fey dandy. To disdain culture and care only for politics is to become mired in soulless earnestness. Balancing the claims of culture and politics is a difficult task but a necessary one.

As a political radical living in a conservative era, I’ve tried to understand the ideas of those I most disagree with. In exploring right-wing thinkers such as Leo Strauss, Hugh Kenner, and Hilton Kramer, I’ve had to deal with another type of balance: the equipoise and empathy required to both understand an alien worldview while criticizing it.

The essays on Canadian culture in this book are very much the notes of a non-native son. I’m a proud citizen of this country but not a nationalist. While Canada is my home, having the dual consciousness of an immigrant makes me look at many of the with the bemused eyes of an outsider.

One border that has thankfully collapsed in recent years is the divide between high and low culture. A playful attitude is not amiss when writing about science fiction or comics. The essays on comics selected here are only a sample of my writing about this form. A fuller gathering might be in order in the future, but for now I wanted to register the importance comics have for me as a vital contemporary art form.

These essays were written for many venues over the course of more than a decade. In giving them a more permanent form here, I’ve made gentle revisions here and there. Re-reading these essays I was struck anew by the fun I had in writing them, pleasure which I hope readers will also share. Jeet Heer is a cultural journalist and academic whose work has appeared in such publications as theNational Post, Slate.com, the Boston Globe, The Walrus, The American Prospect and The Guardian.

He has co-edited eight books and been a contributing editor to another eight volumes. Heer co-edited A Cultural Studies Reader (University of Mississippi Press, 2008) and is the recipient of a Fulbright Scholarship. With Chris Ware, Jeet continues to edit the Walt and Skeezix series from Drawn and Quarterly, which is now entering its fifth volume.

Heer divides his time between Toronto and Regina.