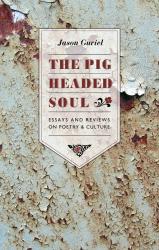 The Pigheaded Soul is a collection of acclaimed poet and critic Jason Guriel’s intelligent, sometimes controversial reviews, essays, and anecdotes on poetry and culture in North America.

The Pigheaded Soul presents a series of witty, intelligent, and sometimes controversial essays in which talented newcomers and avowed masters alike find themselves within the literary crosshairs of acclaimed poet and critic Jason Guriel.

Guriel does not shy away from the negative review, nor does he begrudge praise where praise is due. He applauds the innovative and evocative, rails against the lazy and the imprecise, and critiques the ‘hipster’ mentality of so-called avant-gardists who use the same tired tricks as shortcuts to perceived innovation. But far from providing only reviews and critical readings, The Pigheaded Soul serves up amusing insider anecdotes about the poetry community, from intelligent examinations of inspiration and imagination, to gonzo reportage of high-profile – and occasionally absurd – literary events.

Wry, engaging, and astute, Guriel writes with a confidence and panache that enlivens the often dry and dusty field of literary criticism.

Praise for The Pigheaded Soul

‘Jason Guriel’s The Pigheaded Soul immediately vaults him into the first rank of poetry critics. He manages, in nearly every sentence, to seem amiable, incorruptible and incisive. His survey of Canadian poetry is without rival; his views on American poetry are utterly fresh. I will be consulting this book for a very, very long time into the future.’

When I was younger, I had the habit of imagining what I’d say, were I a rock critic, about this or that album. But such grey literature, dreamed up for the back pages of music trades, was almost always left untyped at the back of my mind. (The one review that escaped my skull: a letter to the editor of Mojo, in which Radiohead is taken to task for its pretentiousness by a pigheaded twentysomething.) My first real reviews were commissioned by a literary magazine, now defunct, that had requested to see some poems, but found nothing to its liking. Several submissions were dispatched; nothing took. In what was surely a last-ditch attempt to get something of mine into print (and save all parties any further embarrassment) the editors wondered if I might like to try reviewing a collection of poetry. That might shut me up.

New assignments resulted in commissions from other magazines: book review begat book review. In the generally dull world of poetry criticism, a remotely sharp judgment will tend to perk the ears of editors who like a little edge, even if some readers elect to call the noise they hear a “hatchet job.” Those conspiracy theorists who assume I have an axe to grind should be assured that the whetstone was usually someone else’s idea.

Put another way, The Pigheaded Soul was written largely by accident, under the radar of even its author, who apparently couldn’t bring himself to turn down too many gigs. The few times I vowed to get out of the game and back to poems, some editor always pulled me back in. Before I could reconsider, I had embarked on yet another criticism spree.

(... Continued in The Pigheaded Soul) Jason Guriel is a poet and critic whose work has appeared in such influential publications as Poetry, Reader’s Digest, The Walrus, Parnassus, Canadian Notes & Queries, The New Criterion, and PN Review. His poetry has been anthologized in The Best Canadian Poetry in English, and in 2007, he was the first Canadian to receive the Frederick Bock Prize fromPoetry magazine. He won Poetry’s Editors Prize for Book Reviewing in 2009. Guriel lives in Toronto, Ontario.