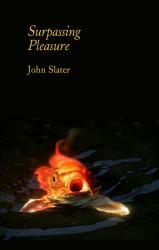 This energetic first collection moves freely from the world of professional snooker to drunken adolescent escapades. Slater contemplates the art of moving furniture, the marginalia of monastic scribes and daydreams in a Japanese garden. Depicting care or abandon, the poems reflect on that unique carefree care for language that is poetry itself.

‘What you’re after comes before and haunts your wanting it ...’

Surpassing Pleasure pulls hard in two directions. Launching for ‘the every-coloured light / streaming through the bright rose-window,’ or savouring ‘flow caught longing for the ground,’ the poems arrive at surprised moments of fusion; for instance, the poet Li Po in ‘Overboard’ who, in his attempt to embrace the moon’s reflection on the water, comes to ‘rest on the bottom of / the duckpond.’

Whether straining at the leash of formal constraints like a watchdog ‘hot on the trail of his own release’ ... or nestling into them like ‘bees nuzzling into ... rain-wet petals,’ Slater combines density and compression with an expressive, fluent music. Open forms, even at their most ragged and disjunctive, remain rhythmically knit and crafted, while the occasional sonnet, villanelle, or ghazal retains something of the ease and authenticity of speech.

‘In the general silence of a Cistercian abbey, one might hope for the numinous to reveal itself-and so it does in John Slater’s poems. From the very first poem in this first collection, Slater, a Cistercian monk, promises that "here in the green world between / eternal fields of light" there will be "...ample, empty, time / to acknowledge / all that is passing...", and further, he will "...clean / with an invisible rag / the dusty windshield" that can divide people and cloud vision. His poems limn the odd and beautiful connections that characterize the divine, and summon the quality of attention required to notice it.

‘Slater leads with transformation, front-loading the book with poems set in the snooker hall, the abbey, the porch, the bottom of the sea. It doesn’t matter where; insight can bloom anywhere, any time. Like the "tiny controlled explosions" of the snotflower decomposing a whale’s underwater skeleton (in "Defused"), Slater’s poems work on the world, digesting it, turning it into small units of light and sound that point toward God.

‘These poems take their time. For the most part, they are one-pagers, carefully crafted and beautifully controlled, whether in free verse or in form. They don’t overreach. And, as Slater writes, reverence is "the source for every poem", even when he’s writing about stealing cigs.

‘The poems move inward as the collection progresses, gradually revealing personal history, first told at some distance, then distilling into poems of loss in the third section. In the sonnet "Rear-view", one glimpses the man behind the poems: moving into a detached and spiritual life, leaving behind a loved one whom he will never quite forget: "...You remain on my mind, / Impossible to hold, or leave behind". This seems to be the emotional center of gravity for the book.

‘Except that it is replaced by another emotional center, the final section, which includes both translations of the Persian poet Hafiz and Slater’s own work, poems of searching and yearning for the beloved, the divine beloved. In the final poem, "Unlocked", the speaker addresses another, noting "...Loss / held in the mouth / like the clean smoke /
of incense; snow under- / foot, our unlocked / cars, and the still / half-built apartments / left open to the cold".

‘No resolution here, but the invocation of a new emptiness. The resulting impression is of a man, still searching, hungry, unfinished, on his way somewhere, leaning against the car for a moment before he resumes his journey. One can’t help feeling that there will be something more-perhaps something less tidy and composed-to come one day from John Slater.’

Slater strives to make his own path from the secular to the sacred, finding subtle existential lessons in commonplace experiences.

‘I wanted to see this book become a part of our literary landscape because it speaks so vitally of one version of the human spirit. Before he is a man of God, Brother Isaac is a man, foibled, incomplete and knowing himself to be so, but working through the risks towards a verity none can argue. We have, I’d suppose, the beginnings of a journey here, and I look forward to a long series of successes in explaining ourselves to ourselves.’

‘There are indeed pleasures surpassing ordinary pleasure in these poems. Whether his topic is the cracking of a safe, drinking in a late-night bar, hauling furniture into a new house, or chanting prayers in the monastery, Slater crafts poems of sharp-eyed wit. His poetry awakens us to those moments when the nitty gritty of everyday life is unexpectedly transformed.’

Surpassing Pleasure is an exemplary fusion of contemplative wisdom, disarming humor and bracing intelligence -- it is a poetry of the polis, of zen gardens and snooker halls, the beehive, the cloister, the koi pond, in a language that performs the swift dance of transience, not unlike Hafiz of Shiraz whose work is also included here, newly translated. John Slater is a poet for the twenty-first century and the footprints on the sky are his.

Mist wrapped the pruned like a lunatic hat-rack
limbs of the lemon-thread cypress
like over-stuffed winter coats, like the gardener’s
lavish plans ... to set up an amoeba-shaped mulch-
bed: two stray ferns, a clipped azalea, moss-
covered rocks in the pine-shade
or transplant a few bamboo clumps
from the overgrown yard of the hermitage
to the offbeat order of the garden where
their olive or aquamarine stalks and
light-green foliage

at last would have room to stretch and spread
like aerials, plant antennae getting
signals from an alien planet,
translations of the gardener’s wish: when I’m gone
and the landscape’s again overgrown
knee-high weeds in the unraked gravel,
set the bamboo free

pull up the plastic borders buried
two feet deep in the earth,
so its offspring, tunneling underground,
apnea swimmers doing laps on the pale blue pool-
floor -- pop up a hundred feet off and
the one-time orderl garden gets
a new look: bamboo forest. John Slater grew up in Unionville, Ontario, and was attracted to poetry at a young age. After three years of literature and philosophy at Trent University in Peterborough, he left school to pursue life as a Cistercian monk, a vocation in which he’s continued happily since January of 2000. Immersion in the rhythm of monastic living, its definite structures and open spaces, were formative in the genesis of Surpassing Pleasure. Slater’s responsibilities include caring for elderly monks and tending a Japanese garden. His poems and translations have appeared in Canadian Literature, Queen’s Quarterly and PN Review. His work, The Tangled Braid: Ninety-Nine Poems by Hafiz of Shiraz, co-translated with Jeffrey Einboden, appeared in the Spring of 2010 from Fons Vitae. Currently he is at work on a degree in theology from the Catholic University of America in Washington, D.C., and is particularly interested in the literary/rhetorical features of the work of Bernard of Clairvaux, a major writer in the Cistercian tradition. After the silence of the cloister, life in Washington (‘like living in a spy-novel’) reminds him often of the saying of Anthony of the Desert: ‘A monk outside his monastery is like a fish out of water.’ Fortunately, Slater finds, he is somewhat amphibious.