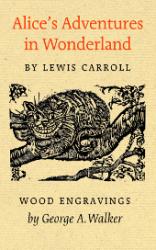 STICKY fingers is all about exploring the intersection of art and language, and no book of literature blends the two quite like Lewis Carroll’s beloved children’s classic, Alice’s Adventures in Wonderland. Follow Alice ‘down the rabbit hole’ as she encounters a hookah-smoking caterpillar, a grinning feline, anthropomorphic playing cards, and a cast of other weird and wonderful characters.

This edition celebrates Alice’s spectacular adventures as well as her equally spectacular artistic heritage with a uniquely modern twist: over one hundred whimsical, eccentric and darkly humorous wood engravings by the ‘Mad Hatter’ of Canadian graphic arts himself, the award-winning George A. Walker. Walker’s engravings are playful, surreal and downright provocative, offering a new and darkly energetic interpretation of Carroll’s masterpiece. An introduction by esteemed author, anthologist and critic Alberto Manguel provides context for the tale, its language, and its unforgettable imagery.

George A. Walker (Canadian, b. 1960) is an award-winning wood engraver, book artist, teacher, author, and illustrator who has been creating artwork and books and publishing at his private press since 1984. Walker’s popular courses in book arts and printmaking at OCAD University in Toronto, where he is Associate Professor, have been running continuously since 1985. For over twenty years Walker has exhibited his wood engravings and limited edition books internationally, often in conjunction with The Loving Society of Letterpress (and The Binders of Infinite Love) and the Canadian Bookbinders and Book Artists Guild (CBBAG). Among many book projects Walker has illustrated two hand-printed books written by internationally-acclaimed author Neil Gaiman. Walker is also the illustrator of the first Canadian editions of Lewis Carroll’s Alice’s Adventures in Wonderland and Alice Through the Looking-Glass books (Cheshire Cat Press). George A. Walker was elected to the Royal Canadian Academy of Art for his contribution to the cultural area of Book Arts.

So she was considering, in her own mind (as well as she could, for the hot day made her feel very sleepy and stupid), whether the pleasure of making a daisy-chain would be worth the trouble of getting up and picking the daisies, when suddenly a White Rabbit with pink eyes ran close by her.

There was nothing so very remarkable in that; nor did Alice think it so very much out of the way to hear the Rabbit say to itself ‘Oh dear! Oh dear! I shall be too late!’ (when she thought it over afterwards, it occurred to her that she ought to have wondered at this, but at the time it all seemed quite natural); but, when the Rabbit actually took a watch out of its waistcoat-pocket, and looked at it, and then hurried on, Alice started to her feet, for it flashed across her mind that she had never before seen a rabbit with either a waistcoat-pocket, or a watch to take out of it, and, burning with curiosity, she ran across the field after it, and was just in time to see it pop down a large rabbit-hole under the hedge....

If you are using an Amazon Kindle, or a device that runs the Kindle App, you will need: sf3_kindle.mobi.

If you are using an Apple or Android device (tablet, smartphone) an e-reader (such as a Kobo or Sony Reader) or a personal computer, you will need: sf3_epub.epub.