A Is For Alice 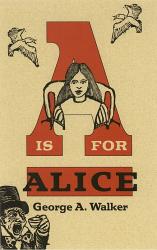 Twenty-six magical images gleaned from almost two hundred wood engravings made by George A. Walker for extremely rare editions of Lewis Carroll’s Alice’s Adventures in Wonderland and Through the Looking Glass (And What Alice Found There) published by Cheshire Cat Press in 1988 and 1998, respectively.

Nineteen year old George A. Walker was a first year student at the Ontario College of Art when he met O C A printmaking instructor Bill Poole in 1980. For some time Bill had it in mind that he wanted to make a hand-printed edition of the ‘Alice’ books. After a few months’ acquaintance with his student’s work ethic and unique image vocabulary, Poole decided that George would be the perfect artist to illustrate them! Bill somehow managed to convince young George of the grandeur of his vision. Then all that was required was for George to teach himself how to engrave on wood as that was the traditional way to print images alongside hand-set text. The project evolved into a ten-year collaboration between Joe Brabant (a member of the Lewis Carroll Society), Bill Poole, and George Walker, the goal of which was to publish the first Canadian edition of Alice in Wonderland, with Joe acting as editor, George as engraver, and Bill as typesetter and printer. On completion of the the first volume, the three then started in onThrough the Looking Glass, which took an additional ten years to complete!

George’s Alice prints are mad and wonderful, everything so carefully rendered, tiny and complex and maybe slightly askew. And bear in mind that relief printing requires the images to to be carved backwards on the block to come out the right way after printing! George often likes to quote the Cheshire Cat who allows as to how ‘We’re all mad here!’

Praise for A Is for Alice

‘Alice in Wonderland has inspired the imaginations of generations of readers, writers, and artists the world over. In A Is for Alice, the visceral merriment and eccentricity at play in Lewis Carroll’s original masterwork shine brightly. Via twenty-six of his intricate wood engravings on the subject (which number close to an amazing two hundred), expert bookmaker and printer George A. Walker offers a glimpse of some of the most memorable moments and characters of Wonderland fame.

‘The book’s release is a mere three months before the highly anticipated blockbuster Return to Wonderland; while this may be fortuitous timing, A Is for Alice is strikingly different from Tim Burton’s prismatic feature. Walker’s Wonderland is captured in bold slashes -- stark, physical renderings of movement and emotion in solid wood. Each image offered here provides evidence of its creation; there is a reminder, with each turn of the page, of the hand and thought that guided each groove. Walker’s ability to impress such great detail (as in the grain of both the fur of the Cheshire Cat, and the branch upon which he is perched) in a print made with woodblocks is remarkable, and is a testament to the quarter-century Walker has dedicated to creating books.

‘The author’s careful selection of passages and images encourages readers to take as little or as much time with the text as they wish. The woodcut images themselves provide plenty to ponder (feeling at times to be actual snapshots of the fantastic and bizarre heroine’s journey) and the alphabetical layout offers similarly brief, yet telling, almost anecdotal-feeling narrative. Carroll’s charm is ever-present in Walker’s playful choices for the letter’s representatives, ranging from the understated ‘C is for Caterpillar’ to the ‘U is for the Jack (Knave) Under Arrest.’ Wonderland is nothing if not a realm of wordplay, and Walker successfully continues the game.

‘At the heart of this book is the art of the book, pages kissed by poetic samples of Carroll’s writing and bound using artisan techniques onsite at The Porcupine’s Quill headquarters. It is a high-quality, collectable edition in which fans of the Alice stories, bibliophiles, and young readers will delight.’

‘... a treat for fans of the tale and poetry alike, highly recommended.’

‘Walker is an artist of many talents and media -- and many contradictions. A figurative artist, he is interested in illuminating abstractions cast up from his unconscious. Literate and articulate, he expresses complex thoughts and ideas in singular images. He published a book without text, letting the images carry the narrative. A generous nature can give way suddenly to a disquisition on social inequality that he also translates into the grammar of picture making. There is a startling muteness and directness to his pictures, yet they are intended to effect change, often in the immediate world around him, or in the viewer’s perceptions of the world around them. The technical dimension of his artistic practice is privileged and apparent in the work, yet the art far exceeds material, method and process. His art is often grounded in the process of automatism, allowing for the unconscious to speak directly and spontaneously in images, even as his technique embraces the painstaking and precise nomenclature of wood engraving, block printing and bookbinding. The immediacy of his messages and their meanings are the product of careful rendering, circumspection and consideration.’

‘ ‘‘What is the use of a book,’’ thought Alice, ‘without pictures or conversations?’’

‘Here is the book that Alice herself would have loved, with wonderfully whimsical illustrations by one of Canada’s greatest woodcut artists, George Walker.

‘George became well known for his depictions of Lewis Carroll’s characters from his previously illustrated Alice’s Adventures In Wonderland and Through The Looking Glass. George has beautifully brought to life his own unique versions of the incredible creatures who inhabit Alice’s worlds.

‘Combining technical mastery with insight and wit, George has re-created a much loved classic in an old world style. This book will be an essential and cherished possession for every Carrollian collector and lover of children’s literature.’