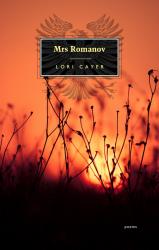 Tsarina Alexandra Feodorovna was many things. She was a granddaughter of Queen Victoria, a dedicated dupe of the notorious mystic Grigori Rasputin—and the steadfast wife of Tsar Nicholas II of Russia and mother to their five children.

In her collection of poems, Mrs Romanov, Lori Cayer gives voice to the expectations and fears of this powerful and ultimately doomed figure. With great empathy and emotion, she presents a portrait in poetry of a woman whose concerns, even as she navigates the ‘forest of eyes and gossiping teeth’ of her unwelcoming adoptive country, prove startlingly domestic. Cayer captures Alexandra’s devotion to her husband and her children, in particular her constant anxiety over her young hemophiliac son: ‘anyone who could see into this house / would see love / breathing itself like a tubercular lung / imprinting itself to life like a snapshot’. But in so doing, Cayer exposes another Alexandra, one whose attempts to bolster her politically inept husband caused Russia to veer sharply from autocracy to revolution, and her family from prosperity to fatal captivity.

Show your own mind, and don’t let others forget who you are

is it wrong that I feel a secret shame for my husband?
I can’t bear to watch him, a fish on the sand

is it love or my own nature that spurs me on?
husband of capitulation, husband of avoidant ways

I apply myself to him as a poultice of pressure
describe a fist, a voice, push him out the door

When dawn opens like a sash, a moment of blank

I recall all that has happened in painful cascade
long lists of unjust acts, and we

my blood runs cold as if Ive been sitting in dirt
entire days have gone abject, how much worse

into belts and hat bands, seams and false buttons
ready to move, empty handed, at a moment’s notice

‘A riveting collection, right from the first poem. Cayer’s writing is sharply chiseled, resonant. In these highly crafted, taut poems, a complex chapter of Russia’s history, the demise of "the old brocaded world order" is explored through the lens of royalty but ultimately, isolation, family, and "love/breathing itself like a tubercular lung". A book of stark, beautiful, striking extremes: iron and lace, old and new regimes, and the dead "underfoot like wet carpet". A tour de force.’ Lori Cayer is the author of three previous poetry collections, including Dopamine Blunder (Tightrope Books, 2016), Attenuations of Force (Frontenac House, 2010) and Stealing Mercury (The Muses’ Company, 2004). Her poetry is endlessly informed by her editorial work in scientific research publishing. She lives in Winnipeg.