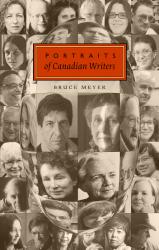 In Portraits of Canadian Writers, Bruce Meyer shares the portraits of some of Canada’s most beloved writers alongside anecdotes that reveal their personalities.

Margaret Atwood, Leonard Cohen, Ray Robertson, Bronwen Wallace—these are just a few authors whose unforgettable words have made them icons of Canadian literary expression. In Portraits of Canadian Writers, Bruce Meyer presents his own personal experience of these and many more seminal Canadian authors, sharing their portraits alongside amusing anecdotes that reveal personality, creativity, and humour.

Meyer’s snapshots, both visual and textual, reveal far more than just physical appearance. He captures tantalizing glimpses into the creative lives of writers, from contextual information of place and time to more intangible details that reveal persona, personality and sources of imaginative inspiration. Through these portraits, Meyer has amassed a visual archive of CanLit that illustrates and celebrates an unparalleled generation of Canadian authorship.

The odd thing about author interviews is that authors always manage to reinvent themselves as they wish to be seen no matter how hard we worked to phrase our questions to reveal something other than the self-aware persona that emerges from the printed page. If an author, such as Al Purdy, expressed both raucousness and profound spirituality in his poetry, the persona he presented to us during the interview only reinforced that perception. What struck me each time we sat down with a writer to discuss his or her work was that they were assured about who they were and how they wanted to present themselves. They were image-conscious, but at the same time disarmingly unaware—if they could be that—of the extent to which they were living the idea of themselves they created to create the work. In some cases, that self-perception was far different from the writer’s day-to-day life. What I learned is that it is hard, if not impossible, to separate the author from the author’s persona. That persona, the voice in the work and the voice behind the work, was more than an expression of a person writing about what they knew. It was the presence of a personality on the page and in the room in front of us that continually sounded its unique qualities. I soon realized that my duty as a photographer—not just an interviewer, critic, or reader—was to articulate that voice that I was hearing in their answers. After each interview I would ask the writer to take me to the place where they felt comfortable and where their imaginative work took shape. Some simply stood still. Others would lead O’Riordan and I to a study or to a back porch or a bay window. That is where these photographs were taken.

Listening to the authors was essential. When I looked through the view-finder of my single-lens reflex or scanned a contact sheet with a slide magnifier (I worked, and still work in black and white, with film, 400 ASA, all natural light, no flash permitted), I realized that what I had to do was more than record the personality I heard or even capture the likeness of the person. I wanted to understand how the words, the personality, and the appearance all fit together like pieces in an elaborate puzzle. Authors are the sum of all these elements and something more that I cannot name but I always sensed was there. Perhaps it was the sense of self-integration that enabled them to do one of the hardest things possible for a human being: to imagine themselves. I realized I had to see them as more than just faces or I would be doing them and their works a terrible disservice. I wanted my portraits of them to be memorable and in order to understand what makes a portrait memorable, I began a study of portraiture.

I realized that portrait is, arguably, the hardest of all the visual arts to learn. This fact struck me when I poured over the works of such contemporary literary photographers as Jill Kremitz (the wife of Kurt Vonnegut), Christopher Barker (the son of Elizabeth Smart and the English poet George Barker), and earlier portrait photographers who had chosen writers as their subjects: Julia Margaret Cameron, Alvin Langdon Coburn, Yusef Karsh, John Reeves, Arnaud Maggs, and the great Nineteenth century French photo-biographer, Nadar. What struck me was that their images were not just snapshots of the person, but serious extensions and reinventions of the art of portraiture, and critiques and interpretations of the authors’ works. That’s a tall order. Bruce Meyer has spent most of his life in an on-going conversation with Canadian literature and Canadian letters. Known across Canada for his broadcasts on the CBC with Michael Enright on The Great Books, A Novel Idea, and Great Poetry: Poetry is Life and Vice Versa, Meyer is author of 49 books of poetry, short fiction, non-fiction, literary journalism and pedagogy. With Brian O’Riordan he produced two books interviews with Canadian authors: In Their Words (1985) and Lives and Works (1991). As a poet, he won the E.J. Pratt Gold Medal twice, the Gwendolyn MacEwen Prize for Poetry, and the IP Prize in the United States, and was runner-up for the Indie Fab Award, and the Cogswell Prize. Among his poetry books are To Linares (2016), The Seasons (from Porcupine’s Quill, 2014), The Madness of Planets (2015), The Arrow of Time (2015), Testing the Elements (2014), The Obsession Book of Timbuktu (2013), A Book of Bread (2012), Mesopotamia (2010), Dog Days (2010) and with H. Masud Taj Alphabestiary (2012). His 2000 book on the Great Books, The Golden Thread, was a national bestseller, and was followed by Heroes (2007). With Barry Callaghan he was co-editor of the landmark anthology, We Wasn’t Pals: Canadian Poetry and Prose of the First World War (2000, 2014), and with Carolyn Meyer was co-editor of the groundbreaking anthology The White Collar Book (2011). Meyer is professor of Creative Writing and Communications at Georgian College in Barrie, and an Associate at Victoria College in the University of Toronto where he teaches in the prestigious Vic One Program. He was the inaugural Poet Laureate of the City of Barrie, and lives there with his wife, Kerry and daughter Katie.