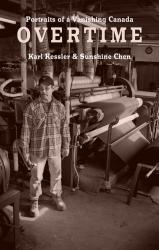 In Overtime, Karl Kessler and Sunshine Chen document the lives of men and women who practise vanishing trades, professions and cultural traditions in the cities and townships of Waterloo Region, Ontario.

When was the last time you visited a shoemaker? A watchmaker? A tailor? Have you met a sign painter, a typewriter mechanic or a shirt factory worker? Do camera stores and independent department stores still exist in this day and age? What exactly are the principal responsibilities of a town clock keeper?

As automation and modernization bring to the brink of extinction many twentieth-century ways of making a living, we find ourselves in danger of losing the accumulated skill of generations of Canadians. Through the compelling photographs and moving interviews in Overtime, Karl Kessler and Sunshine Chen give voice to fifty proud workers based in the heart of Southwestern Ontario, preserving their stories for generations to come.

‘It actually is something beating inside this building, keeping it alive....’

Once a week Joe climbs into the base of the tower to wind the giant original brass movement of the J.B. Joyce and Co. eight-day pendulum clock. Using ‘elbow grease’ and a two-handed crank, he spools up the weighted drive cables.

As they unwind from the movement, turning the gears and striking the bell, the cables ascend two storeys, pass through a series of pulleys, and disappear into a space behind the wall where they slowly drop. A gear shaft also rises to the uppermost room, where it moves the hands of the four glass- and-metal clock faces. In a room between the faces and movement is the big bell.

The clock loses two minutes between windings. Some locals tell Joe they set their own clocks by it.

Several tower clocks still operate in Waterloo Region, but Elmira’s is one of the last in Ontario keeping time with a wind-up mechanism. Joe says it could run forever: ‘The only thing stopping it would be somebody not caring.’

Most of what Joe knows about the clock he learned from its previous keeper, his father-in-law. Joe meticulously cleans and oils the gears; any debris could halt the entire works. He also makes repairs. ‘You have to treat it like it’s your own.’ The bell strikes eleven and the tower reverberates. Joe winds the bell, then the movement: sixty-four turns of the crank each. He is breathing quickly, smiling. ‘We worry so much about tomorrow, but we should just live in today,’ he says. ‘Today is precious.’ Karl Kessler is a film-and-darkroom photographer originally from New York City. He moved to Ontario in 1996 and currently works as a researcher and writer in the heritage field. With his wife Jane, he coordinates the annual architectural and heritage event Doors Open Waterloo Region. He lives in Waterloo, Ontario. Sunshine Chen originally trained in architecture at the University of Waterloo. He now runs Storybuilders Inc., using photo, video and audio to tell the stories and share the experiences of people, places and organizations across Canada. He lives in Canmore, Alberta.