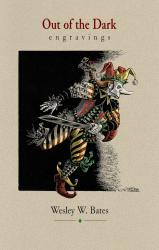 In Out of the Dark, master engraver Wesley W Bates presents a compilation of wood engravings that bring to life exquisite landscapes and arresting scenes, all rendered simply but powerfully in the deep back and stark white of the storied artistic technique.

The exacting art of wood engraving is defined by presence and absence, shadow and light, black and white. An arduous yet rewarding art form, it requires an artistic eye and a dedication to technique in order to imbue each image with its own visual narrative.

Wood engraver Wesley W. Bates, the artist behind the acclaimed book The Point of the Graver, demonstrates the power and precision of the form in his new collection Out of the Dark. Bates brings to bear decades of experience, deftly wielding his graver to coax vibrant and lifelike images from solid blocks of endgrain wood. In so doing, he frees each likeness not only from the blocks that hold them captive but also from the reaches of his prodigious imagination.

With a wide variety of engravings in Bates’s unmistakable style, and accompanying texts to bring the reader into the artist’s studio, Out of the Dark is a treat for all who appreciate the traditional form.

From the Introduction by John Shoesmith

For an illustrative medium that exists primarily in black and white, Wesley Bates sees plenty of colour in a wood engraving. Not actual colour—fiery reds or sky blues or leafy greens—but ‘colour’ created by the symbiotic relationship of the black and white marks on a wood block. The direction of the lines, along with their fluidity and grace; the texture and balance between light and dark; the middle tones; the crispness of the image; the strokes that bring the content, the actual image, to the viewer. On a wood block, after all, it’s the white that creates the image—think of white chalk on a blackboard. Wesley believes that to create an image, you bring in the light—from out of the dark, one might say. Black and white, opposites that attract. It’s why we don’t think of Wesley’s work as lacking in colour—it’s as vibrant as a rainbow after a storm.

While Wesley may have been a somewhat late arrival to the art and craft of wood engraving—his earliest interests and studies were in painting and printmaking, along with the laborious craft of Japanese block printing—a seed may have been planted at a young age via two books produced in the 1940s: Jane Eyre and Wuthering Heights, illustrated by the German-American engraver Fritz Eichenberg. These books were part of what Wesley refers to as his family’s ‘travelling library’—his father was an RCMP officer, so the family moved often (his artist sensibilities however may have been inherited from his mother, who studied in New York City as an artist)—and they were two that he would frequently pull from the shelf. He didn’t actually read the texts written by the Bronte sisters, but instead focused on Eichenberg’s now-iconic illustrations, such as a brooding Heathcliff underneath a leafless tree, or him exhuming Catherine’s body from the cold earth. One didn’t need to read the prose: the illustrations were enough to get the gist of the drama that was enfolding.

Many years later, after he was gifted some engraving tools and a couple of wood blocks, he was roaming the stacks at McMaster University, seeking books to help crack the code of wood engraving. There, on the shelves, perhaps a sign of fate, were copies of the Eichenberg-illustrated Bronte books. As he began working with wood, he would soon discover other engraving masters and muses: Joan Hassall, Agnes Miller Parker, Simon Brett. (He ended up discovering another, albeit unlikely, source of inspiration: Leica camera catalogues, with the equipment depicted via wood engraving.) But of course towering above all historically was Thomas Bewick.

While wood was the medium for illustration since the earliest days of book production, it was eventually replaced over time by other print illustrative techniques, namely metal engraving, especially copper....

[Continued in Out of the Dark] Wesley W. Bates was born in Whitehorse, Yukon Territory. One of Canada’s best-known wood engravers, Bates has ventured into book illustration (W. O. Mitchell’s The Black Bonspiel of Willie MacCrimmon), film (Look and See: A Portrait of Wendell Berry), commercial art (the voyageur motif for Upper Canada Brewery), letterpress publishing (through his West Meadow Press) and acoustic old time music played on a vintage 1920’s mandolin. A collection of his engravings, The Point of the Graver, was published to great acclaim in 1994. A retrospective of his engravings In Black and White was published by Bird & Bull in 2005, with a revised edition published by Gaspereau Press in 2008. He now maintains his studio, which is open to the public, in a nineteenth-century storefront on the main street of Clifford, Ontario.