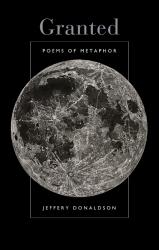 In Granted, Jeffery Donaldson explores ‘a universe of potential relation’, providing a master class in the art of metaphor by exploring in verse the complexities of identity, perception, and meaning.

Metaphor is the substance of things hoped for and the proof of things not seen. It is a building block, not a tower or its view. It is a gift impossible to guess, and not to be opened until you do. Metaphor is coinage dropped so that others might decipher us.

The poems in Jeffery Donaldson's Granted serve as a sort of Metaphor 101, an education in the making of metaphor, its motives and its meaning. But more than that, these poems represent a study of being—and of becoming. They make relations, correspondences, attachments, and in so doing, they investigate the gaps between identity and imagination, truth and perception, love and faith. As Donaldson reminds us, when it comes to metaphor, distance makes no difference: it `breathes / in impossible spots, pairs that can't be, / and finds in them untold possibilities.'

After my mother and my father died,
I went the longest time not seeing them.
It was strange at first. Their not being here

was quite unlike anything I had known
up to the time. And not knowing, it felt
as though an old familiar table,

which perhaps I had taken for granted
most days when I would often place my keys
on it when I got home, had disappeared,

and without the table I'd stand with the keys,
not wanting to put them down somewhere else
where they wouldn't belong, and I might

lose them, and I would be lost where to turn,
until one day, coming home, I saw them,
right there, not as the table but the keys.

Folks are talking. What he said, what she said.
What she said he said, and the other way.
All the play has gone out of us, it seems.

Everyone is trying to get along,
mostly. I saw a couple in the park
sitting on an empty bench, hashing it out.

They'd been saying things back and forth.
He seemed the pushy one, she the sharer.
What held them apart was a difference

not solved between them, a side of each each
hoped to get across. We’re unlike, he said.
To call a truce or to be adamant?

Then he reached out and took the woman’s hand.
She didn’t pull it back, but you could see,
for her part, it had stopped being her hand.

I could never dream, o day of my birth,
how you put your hat beside your satchel
on the beach and made a sanctuary

along the shoreline, empty in every
direction. The gesture itself was not
so much accidental, as unforeseen

in its significance. I never found
a reason for it. The hat was a hat.
The satchel the same. But somehow the two

of them together on the shore, empty
in all directions, said more than either
alone could do, more than the vacant beach,

and certainly more than you yourself,
who waded from shore before I got here,
could have told me, had you ever returned. Jeffery Donaldson is the author of several previous collections of poetry, including Slack Action (Porcupine's Quill, 2013), which was shortlisted for the Hamilton Arts Council Literary Award for Poetry. Palilalia (McGill-Queen's, 2008) was a finalist for the Canadian Author's Association Award for Poetry. Donaldson has also written works of criticism on poetry and metaphor. He lives in Hamilton, Ontario, where he teaches poetry and American literature at McMaster University.