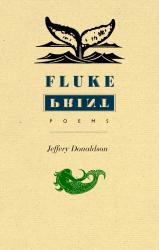 Jeffery Donaldson’s Fluke Print is a collection of imprints, opposites and offsets—poetry that reflects on and reimagines creativity, emotion and intellect. For, as Donaldson writes, ‘Both ends of this dull pencil have their say / and go together.’

Jeffery Donaldson’s Fluke Print reflects on chance occurrences, on quiet, familiar scenes and impressions—prints, if you will—in which ‘Each word’s a wake that, glancing, folds aside / in parting phrases, under a furrowed brow, / then opens into passing stillnesses...’ His is a poetic world in which myth and memory are fitting counterparts to science and knowledge; in which pain, passion, and patience are equally worthy sources of inspiration; in which space and time are relative concepts, illusions of each other, points of intersection on a continuum that is vast and may, in the end, be unknowable.

In Fluke Print, Donaldson invites readers to don the mantle of a man filled with questions and doubt, to approach the cagey, skittish muse, to conjugate the moods of selfhood and to seek apprenticeship to a great scholar of being.

Both ends of this dull pencil have their say
and go together. For when I try

the tapered point, finding I am led
to write before I die its darker things, instead

catch my eye ascending to the nub
(the nodding jester’s blunt "ah there’s the rub!")

that daubs above the dismal lines below
a flourishing "I would not have it so."

Dyslexic, mute, it holds — that subtle curse —
a mirror up to nothing, in reverse.

My aching slant, my least that can be said,
is followed backwards by a nulling thread,

a clear, upending scrub, as though the baser
word that everything must go

were giddily extinguished in the air.
What all I cannot say is written there.

Among our parsing, several moods
of selfhood, conjugated thus—
I am, you are, she is, word-chess
where grapple our twinned solitudes,

where all our spoked divergent lines
of empathy come to quarrel—
we seek a marriage of true Mines
in the first-person plural.

First person? Plural? We won’t add up.
The pronoun buckles under weight.
Our one-for-two’s an iffy trope,
dichotomous and incomplete

unless made whole by that pure is,
the metaphoric predicate,
whose blithe between-where synapses
can couple kinds, make this a that.

Sooner said than done. Lying alike
conjoined, subjects that in part agree,
we give it the old college try,
our both I’s open, cheek to cheek,

and listen, knowing how, just when
you touch your inner, stranger half,
my me divides you from yourself,
but seeks you there, again, again.

How else to conjugate, or dance
our pas de deux of Her and His,
to merge and part, on the off chance
(however wrong) we is, we is.