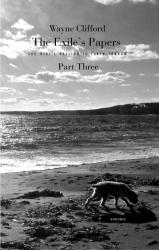 This is the third installment in acclaimed poet Wayne Clifford’s series of sonnets, The Exile’s Papers, a project decades in the making and now recognized as one of the most inventive creative projects ongoing in Canada.

Wayne Clifford’s The Exile’s Papers first appeared in 2007 with the publication of The Duplicity of Autobiography, but this creative project -- a four-part series of hundreds of surreal, straightforward, narrative or mythic, and endlessly varying sonnets -- is the culmination of decades of effort. In 2009 the series continued with The Face As Its Thousand Ships, and now emerges the third installment: The Dirt’s Passion Is Flesh Sorrow.

Described by critics as ‘resonant’, ‘striking’, ‘quixotic’, ‘elegant’, ‘ribald’ and ‘jazzy’, Clifford’s sonnets defy categories or boundaries. He is a master of the form and every page is an example of how a great poet can use a complicated structure to achieve depth of thought, beauty and explosive resolutions (or, in many cases, questions). In fact, every poem reinvents the sonnet itself, and, despite all poems sharing the same form, each one is sharply, conclusively differentiated from the others. These are sonnets like you’ve never read before.

Clifford often draws on his own life experiences -- fatherhood, love, death and uncertainty -- but he also has plenty to say about God, pop culture and the foolhardiness of certain current political figures. In the end, though, the collection remains a remarkably cohesive, intelligent and death-defying foray into an ancient form that never knew what hit it.

Praise for The Exile's Papers, Part 3

‘As with the first two installments of The Exile’s Papers quartet, The Dirt’s Passion is Flesh Sorrow leaves the reader challenged and changed, both conceptually and intellectually.’

Here, at the Now

I set out on a journey. Someone else
came back. And home seemed a mock-up elves
had glued from shattered memories set false
against a much too perfect background. Selves
of who had been a tourist, who had bought
the cheap, unpackable, bright, woven wares,
persisted, as did those of he who sought
at last an absolution from the cares
of things. Sunlight itself seemed thinned; the dark
was filled with shaky handholds, bed a grief
that brought a sleep with no relief, left stark
afterimages of deserts, and the too brief
comprehension he was somewhere else
at last, this stranger rousing in my pulse.