Every Minute Is a Suicide 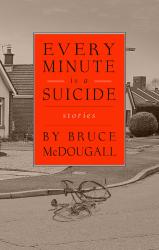 A collection of short stories centred on a father’s disappearance and his son’s decades-long journey toward answers.

At once a coming-of-age tale and a baffling tragedy, Every Minute Is a Suicide follows a son’s journey into middle age from boyhood in the aftermath of his father’s mysterious disappearance.

In spare but poignant prose, these nineteen stories capture the disappointment that follows on the false promises of childhood as the boy navigates painful family Sunday dinners and his first dance, an Ivy-League education, dead-end jobs and self-sabotaged love affairs. He longs for acceptance but feels at odds with friends, lovers, family and himself. His sorrow and confusion culminate in a profound spiritual crisis in the dark, frigid months of a Yukon winter.

With clarity and a keen eye, leavened by dry wit, these stories explore the struggle to make sense of the world—and to find one’s place in it.

From "A Dangerous Man"

Our mother told us years later that she’d moved us away from our father because he’d hit her, and she’d begun to fear that he might start hitting us too. "I wasn’t afraid of what he might do to me," she explained. "But I was awfully worried that he might hurt you."

At first, it felt exciting to ask our mother to tell us this story. My sister and I listened as if she was describing a close encounter with a train wreck. We felt lucky to have survived unscathed. But our mother never changed her story, and her one-note explanation of why she’d abandoned our father became a bit boring. Eventually, the excitement wore off, and we let the subject drop.

I never dared to challenge her story or ask her to elaborate on the details. I never asked her to explain why she’d married our father in the first place, what led him to become such a brutal man, or how she could have had children with such an oaf. I didn’t ask such questions, because I knew that the answer had something to do with me, and I didn’t want to remind our mother that she could have had a better life without me. With one of my parents gone, only she remained standing between me and the world. I wasn’t about to give her the chance to abandon me the way she’d abandoned my dad. So I kept my questions to myself and made up the answers as I went along.

My sister and I thought our mother was a brittle woman. She let us know that she was doing her best to provide for us, but she also made us feel that, if we asked for too much, she might break down under the strain. If she broke down, my sister and I would have no one but each other to look after us, and by then neither my sister nor I really trusted each other to come through in a pinch. After all, my sister at the age of eleven had known for months that we would move away from my dad. Our mother had sworn her to secrecy, and she had said nothing about it to me. Who would keep such a secret from someone she loved and trusted? My sister was not my ally. She was my mother’s daughter.

My sister and I both knew it was too much to ask our mother to explain in detail her reasons for abandoning our father. It wasn’t her job to satisfy our curiosity, and we didn’t press the issue. We just did as we were told. He was a dangerous man, and neither my sister nor I wanted any more danger in our lives. It took our dad more than a year to find us.

We’d moved in August to a house in the new suburbs west of the city. There was an empty field across from our house and a shopping mall at the end of our street with a drugstore and a grocery store, and a highway beyond that. On the other side of the highway, there were apple orchards and dairy farms and a creek where my friends and I went fishing for chub with hooks fastened to string tied around branches; we sat under trees and ate beans out of tin cans that we later crushed and buried under a rock.

At night I would lie on my sister’s bed while she did her homework, listening to John Sprague, the disc jockey on CHUM. I liked songs like "Wolverton Mountain" and "The Battle of New Orleans" and "All American Boy", especially when Bobby Bare sang about sitting with the girls in the back seat of a Cadillac. My sister would tell me ghost stories, and sometimes we’d sneak out the side door of our house and creep around in the dark like commandos through our neighbours’ backyards. It was a pretty good life, and I didn’t think I missed my father.

(Continue reading in Every Minute Is a Suicide...)

Praise for Every Minute Is a Suicide

‘At the heart of this book is a remarkable piece of writing, "Every minute is a suicide". Its emotional arc—from cyanide sarcasm to a tentative redemption, a deeply moving forgiveness of self and others—is brilliantly finessed. McDougall can be uproarious and heartbreaking in the same paragraph, even the same sentence. And none of it feels faked.’

—Steven Heighton, author of The Dead Are More Visible

‘These stories are wonderful. They flow so easily. They have such a strong sense of place. These stories relate to and reinforce each other in the same way as themes and motifs do in a symphony. I felt a natural storyteller is at work here.’ Bruce McDougall has been a freelance writer for more than 25 years. He has written or co-written sixteen non-fiction books, including biographies of Charles Mair, the Canadian poet; John Wilson Murray, Canada’s first detective; and Ted Rogers. He has published essays in The Antigonish Review and short stories in Geist, subTerrain and Scrivener. His non-fiction novel, The Last Hockey Game, will be published in 2014 by Goose Lane Editions. He is a graduate of Harvard College, where he was an editor ofThe Harvard Lampoon, and attended the University of Toronto Law School before becoming a full-time writer. He lives in Toronto.